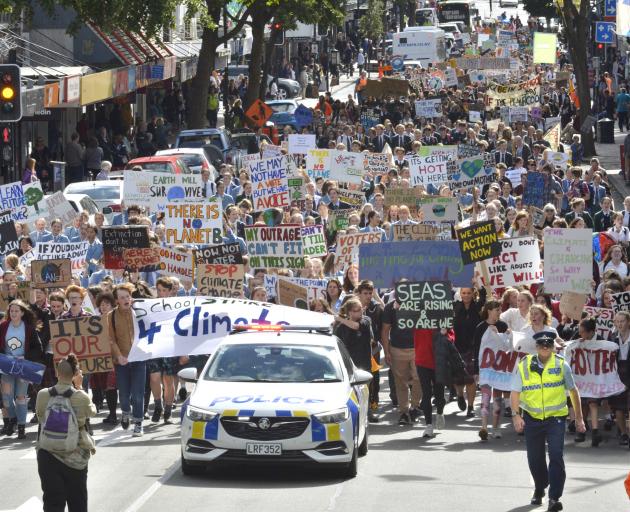 Thousands of protesters calling for action against climate change marched down George St in Dunedin. Photo: Gerard O'Brien
Ian Harris tells how the brain, the ocean and protesting young fused in a moment of serendipity.

Most people have probably experienced a serendipitous moment when some thing or thought from one area of life brushes against another quite unrelated - and a light flashes on. There's a connection, a revelation, a way of seeing that wasn't there before.

Three unlikely ingredients sparked such a moment for me recently: a small book about a shift in Christian perception from a supernatural-based spirituality to a natural one; an ocean symposium as part of Tuia 250, marking 250 years since Captain Cook's landfall in Poverty Bay; and the rising rebellion, especially among the young, against pussy-footing over climate change.

The book, by retired psychiatrist Kenneth Bragan, of Wanaka, is New Directions for Christian Renewal. Drawing on new understandings of the plasticity of the brain, Bragan says "it is now known that thinking of itself may have an impact on the brain.

Abstract thinking can change the brain."

Inner images exert a powerful influence, as we see in Buddhist belief in the inner Buddha and a Christian emphasis on growth towards wholeness through the Christ archetype of love, grace and transformation.

This inner image is the agent of change, and it can shift the focus from a spirituality rooted in a supernatural world to one that belongs fully within the natural order.

Bragan notes that a common feature of near-death experiences, an inner experience if ever there was one, is a sense of "presence" along with feelings of peace, joy and deep understanding, which the subjects feel has changed them for the better.

The role of inner, subjective experience in building a better world is the first strand of my serendipity.

The second arises from Te Paepae o Tangaroa, a symposium in Gisborne designed to honour and learn from Pacific peoples' relationship with the sea. This centres on respect and obligation, including the duty to safeguard the ocean's well-being.

To Polynesian peoples the ocean has its own mauri or life force symbolised in Tangaroa, usually called a god but perhaps more helpfully conceived as the life force of the sea.

If that life force were to address us from the paepae, or orator's bench, what would it say about seabed mining, over-fishing, warming, acidification, plastic and other pollution?

Promoting a concept of stewardship is a good start. But that would be greatly enhanced by recognising a beinghood, even personhood, inherent in an ocean, river or mountain as life forces with which to reckon.

In New Zealand that's beginning to happen more openly, including in the public arena.

Five years ago the Te Urewera Act recognised the Tuhoe heartland as "a place of spiritual value, with its own mana and mauri. [It] has an identity in itself, inspiring people to commit to its care".

Two years ago the Te Awa Tupua Act declared the Whanganui River to be a legal person, so that wherever it makes sense, the river will have the same rights as a legal person or company, including natural justice.

Think what a difference it would make if, instead of approaching rivers, lakes and mountains as inert geographical features ripe for exploitation and enjoyment, we related to them as living beings with a life force to be honoured, respected and feared.

But by and large we don't, and so to strand three: the passion of Greta Thunberg, Extinction Rebellion and students turning out in thousands to protest at the sluggish political and business response to climate change and the pollution of the planet on which all life depends.

For the Earth and those children's futures, this is the defining issue of our time.

My serendipitous moment came when these inner and outer strands of life flowed together: the pivotal role of inner experience - not everything has to be validated by science or rational analysis; the deep change that would happen were we to acknowledge and honour the mauri of the natural world; and the threat to survival caused by greed, self-interest and apathy, against which the young especially are revolting. It's their future that's no longer assured.

And the connection will be stronger if it is powered by a spirituality rooted in the natural and nurtured in the brain. Minds that turn habitually to the good, the true, the beautiful, the inner Buddha, the archetypal Christ will generate richer outcomes for themselves and the planet than those focused on money, status and power.

And minds prepared to imagine a life force, a personhood in each river, ocean, mountain will end up blessing both those natural features and themselves.

"against which the young especially are revolting. It's their future that's no longer assured."
Our current youth, are the most well cared for that has ever been.
Over resent years they have become fearful of the future not because of what they are actually experiencing but because of what they are told to expect from the UN, then government, the state run education system and finally media.
This fear of the unknown ( be it death or the other group ) method of thought control has been practiced by the powerful throughout history.
The latest iteration is totally Orwellian in that is manipulates the language of love and compassion into condemnation and hate of our society and the non-believers.
Yes, climate change has become a religion for many but that is not a good thing.
The reason our society has prospered over the last few centuries is because we removed church from state.
The current reversal of that, with the adoption of the climate change religion, will result in the future of our young being dictated by faith in its predictions and not fact.

This is an intelligent post, apart from the suggestion that the young are 'conditioned'. With their own agency, they take action, based on observable evidence.

Adults are not in charge of the future.