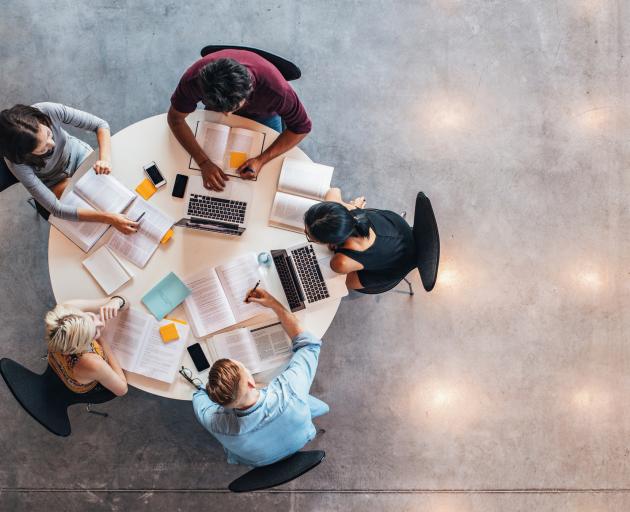 Much of what students learn will live with them for the rest of their lives. PHOTO: GETTY IMAGES
At times of uncertainty, one of the things we need most of all is what nourishes and enriches us within, writes James Harding.

A few weeks ago, a friend challenged me to post on Facebook, over 10 days, images from 10 films that have had an impact on me.

I must confess that I usually hate this sort of thing, and was a bit reluctant to get drawn in. Apart from anything else, I really didn’t need any more temptation to waste time in the mind-boggling triviality of social media.

Sometimes, though, even the most trivial of pastimes can turn out to be worthwhile, in the most unexpected of ways. Perhaps at a time like this, when we are faced each day with so much uncertainty, and when the news is dominated by an unfolding human tragedy that will leave few, if any, of us untouched, it is the trivial things that will keep us going. I started to look forward to posting my film each day, and discovered that I was learning something, however insignificant, about myself.

After 10 days I had a list of films that all seemed to have one thing in common. From Torch Song Trilogy (1988) to Boy (2010) to Menashe (2017), they were all to do with deeply flawed human beings trying to make the best of very difficult situations over which they had little, if any, control.

One film that didn’t make it on to my list, but is nonetheless close to my heart, is Nicholas Hytner’s The History Boys (2006), based on a play by Alan Bennett.

Set in a mediocre English grammar school in the early 1980s, it is about a group of boys who have excelled in their exams and, for the sake of the school’s prestige and the headmaster’s ego, are persuaded to come back and try for Oxford and Cambridge.

Among their teachers is the deeply flawed Hector, apparently based on Frank McEachran, whose approach to education could not be further from that of the headmaster.

His students are being expected to cram for exams that, should they pass, would open the door for them to "get on" in life, to have opportunities for success of which their parents could scarcely have dreamed. Yet this is not Hector’s way.

Instead of cramming for the sake of exams, he has his students learning poetry by heart with no ulterior motive in mind. For small bets they test his encyclopaedic knowledge of film by acting out classic scenes from cinema, and in one memorable class he has them practising the French subjunctive and conditional by playing out a scene in a brothel (maison de passe).

Perhaps the most poignant moment is when, after a grave misdemeanour has led to his enforced early retirement, Hector has one of his students recite Thomas Hardy’s poem Drummer Hodge (1899) from memory, and we get a glimpse of just what it is that so moves him about the world of poetry, enough to share his love of poetry with others.

I teach the Hebrew Bible, a collection of ancient books that are sacred Scripture for Jews and Christians.

As a Christian and as a priest I need little persuading that these works are of value, though I am well aware that their value is not quite so obvious to others, even perhaps within the university. It is by no means easy to make the case for studying and teaching them without the appearance of special pleading.

Yet if the past few weeks have taught me anything, it is that Hector, for all his obvious flaws, may have been on to something. Early in the film, he quotes to the class the words of A. E. Housman, that "all human knowledge is precious, whether or not it serves the slightest human use," and we are given to understand that this is what guides his approach to teaching.

Much of what his students learn seems to them arcane and abstruse, impossible to understand with their limited experience. Yet what they learn will live with them for the rest of their lives.

At times of uncertainty, one of the things we need most of all is what nourishes and enriches us within, that feeds our soul.

This, I think, is why we need to recognise that what is of most enduring value is unlikely to be what seems most obviously practical, useful, or relevant.

Perhaps what we really need is a deeper immersion in language and literature — to return to Homer and Virgil, to Shakespeare and Job, and to whatever riches our particular cultures have bequeathed to us. Such treasures have the power to shape us, as individuals and as a society, and it may be that it is here that we will find what will nourish us enough to go on.

- The Rev Dr James Harding is senior lecturer in Hebrew Bible/Old Testament studies at the University of Otago, and a priest in the Anglican Diocese of Dunedin.