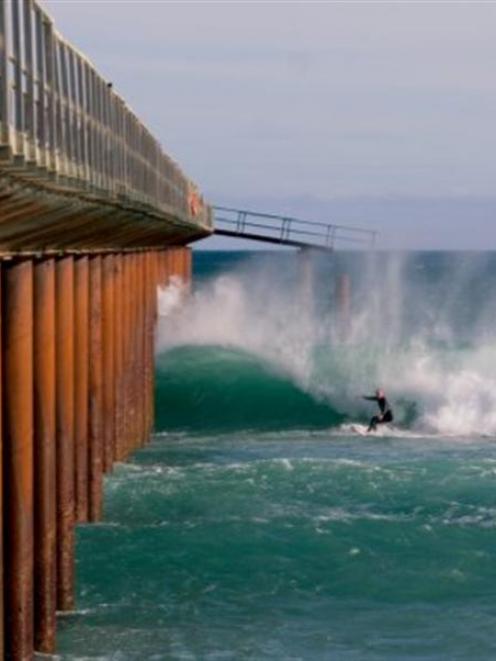 Surfers take advantage of the conditions created by the now-removed outfall platform at Tahuna. Secondary treatment would mean "no more pollution on city beaches" and "no more hepatitis inoculations for life-savers". Photo supplied.
Former Otago regional councillor Neville Peat says that, new stadium or not, the City Council must complete the Tahuna wastewater treatment project on time.

The spring of 2011 should be a glorious time for Dunedin.

Three Rugby World Cup matches booked into Carisbrook (or a roofed stadium, should it happen), and the commissioning of a flash new sewage treatment system.

No more pollution on city beaches.

More than six years in the making, the Tahuna sewage upgrade project is due for completion by September 1, 2011, the month before world rugby hits town.

That date was set by resource consent commissioners in 2003 and subsequently backed up by Environment Court and Minister of Conservation decisions.

Back then, the city council had another view - secondary treatment was "unaffordable".

The council said as much at the hearing.

What it wanted to do was install a one-kilometre pipe at a cost of $37 million, activate chlorination whenever the sewage plume looked like contaminating city beaches, and just keep on fine-sieving the sewage effluent as before, the way it has been done since 1908, dribbling out from underneath Lawyers Head, smudging the sea surface.

Well, the pipe is in now and operating, and today the council's infrastructure services committee is discussing a paper from the council's wastewater unit recommending a $74.3 million ultraviolet disinfection and sludge treatment process - a heaps-better solution than chlorination on its own.

City plumbing, the basis of civilisation, some would say, doesn't come cheap.

The recommended process is $9 million more than is provided for in the council's long-term plan.

But the council must not flinch.

Decent wastewater treatment was what the public cried out for around the turn of the millennium.

It was the No1 public concern.

It would surely trounce a new roofed stadium in any referendum on what projects the council should proceed with and over which it should go into massive debt.

The total cost of the Tahuna upgrade, including the pipe, would be $111 million if the council agrees to the UV process.

Eight years ago this was unaffordable.

Really? In 2009, the council has voted to support a roofed stadium that adds $108 million to the red line plus a few tens of millions in a bridging loan pending payments rolling in from the private sector.

All that, plus a $45 million Town Hall redevelopment, an Otago Settlers' Museum expansion and an unknown number of water, stormwater and wastewater pipe renewals, means that council debt is set to spike alarmingly over the next couple of years.

Given council cautiousness over Tahuna spending in the past, would it not be prudent to spread the debt by postponing a decision on the stadium for, say, five years, maybe up to 10?

The stadium had appeal three years ago - a new multipurpose addition to the city's impressive array of public amenities; so long as ratepayers were not overburdened.

But the ground has clearly shifted on the stadium in the past year.

Let us get through the recession (which shaky debt helped create in the first place) and encourage a higher level of private-sector support for the stadium.

Let us develop its multipurpose premise so that it looks at least halfway credible and affordable, and less desperately dependent on rates and taxes.

Why so little private-sector investment? Why the rush? If debt is a difficulty, and there is clearly a suspicion of this, why not postpone?

It has overwhelming public support and needs to be completed by September 2011 or it will be in breach of the Otago Regional Council's coastal plan, which, by that time, requires clean water for swimming, surfing and other forms of contact recreation, and safe shellfish-gathering water quality.

A hundred years ago, when sewage flows were considerably less, the city council commissioned the Lawyers Head outfall and probably congratulated itself on a job well done.

The sea would dilute the effluent.

Dilution was the solution.

This is no longer acceptable.

Bacteria, viruses, protozoa and other health hazards all need to be cleansed from the effluent.

The current suite of coastal permits allows a peak discharge rate from the diffusers at the end of the outfall pipe of 4000 litres a second.

A treatment system to cope with such volumes is expensive.

But the cost is less than a roofed stadium, and whereas the Tahuna project is destined to come up smelling of roses, can the same be said for a new roofed stadium?

Right now the benefits of Tahuna are a lot more tangible and believable.