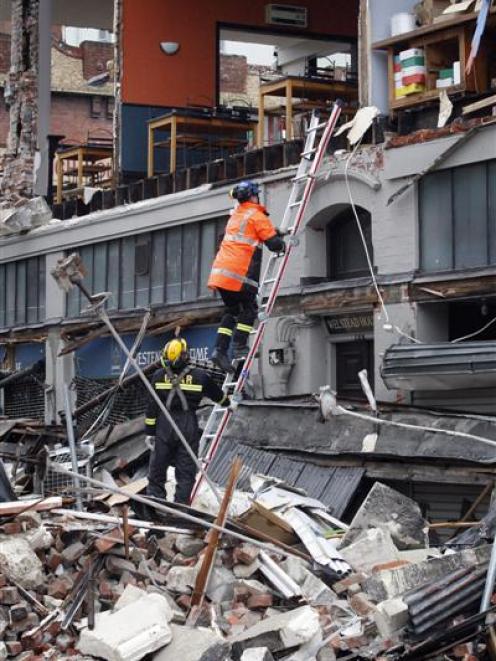 Search and Rescue teams work to temporarily secure a building on the corner of Worcester and Manchester Sts in central Christchurch following a 7.1 magnitude earthquake last September. Photo by NZ Herald.
Jason Ingham has been investigating the failure of building stock during the Christchurch earthquake, in particular the fate of unreinforced masonry buildings.

The significant damage caused by the Darfield Earthquake has focused attention firmly on buildings that may be at higher risk in an earthquake.

The performance of unreinforced and retrofitted masonry buildings has been of particular interest and observations from the Darfield earthquake are extremely relevant to Dunedin, Queenstown, to all of New Zealand and to earthquake prone zones internationally.

I lead a postgraduate team investigating and developing guidelines for seismic assessment and retrofitting of earthquake-prone buildings.

Along with many others, including building inspectors from Queenstown and Dunedin, we conducted initial assessments of building damage following the earthquake.

Of all the damage to commercial buildings in Christchurch, most was to unreinforced masonry (Urm) building stock with a number of common failure patterns.

Dunedin has a reasonably large number of unreinforced masonry buildings of the type that failed in Canterbury, including commercial buildings and pre-1930 residential properties.

Few Urm buildings were constructed in New Zealand following the Hawkes Bay earthquake in 1931 but there are still about 3750 Urm buildings countrywide with distribution generally in line with the relative prosperity of communities between 1880 and 1930.

So, most of our Urm buildings are more than 80 years old and, while they may be seismically at risk, they make up a significant component of our heritage and landmark buildings, often in key commercial centres.

Following the 1931 earthquake, the New Zealand Standards Institute was established, resulting in the development and updating of building codes.

Ultimately, attention turned to how existing buildings would perform in earthquakes.

An amendment to the Municipal Corporations Act in 1968 empowered city councils to require building owners to strengthen or demolish buildings which were considered earthquake prone.

Some councils took a more active approach - in Wellington, 500 of the 700 buildings identified as earthquake prone were strengthened or demolished.

Other centres, including Christchurch, took a more passive stance, waiting for a change in use or other development to trigger requirements.

The introduction of the Building Act 2004 required all Territorial Authorities to adopt a policy on earthquake-prone buildings by March 31, 2006.

Queenstown Lakes District Council is also reviewing the district's building stock based on priorities, to identify buildings that fall within the scope of potentially earthquake-prone buildings under the Building Act.

Damage to Urm buildings in the Darfield earthquake was generally consistent with expectations.

Of 595 such buildings assessed in Christchurch following the earthquake, 21% were assessed as unsafe, 32% as requiring further inspection and 47% safe for public use.

Key failings included numerous parapet and gable end wall collapses as well as building frontages and side walls, due to the weak out-of-plane strength of Urm construction.

These collapsing sections often caused further damage by falling through canopies below or through roofs of neighbouring buildings.

Unsupported or unreinforced brick chimneys performed poorly, with numerous chimney collapses in domestic as well as small commercial buildings and some churches.

In several cases, wall collapses were found to be due to poor or no anchorage of the wall to the supporting timber diaphragm.

Many Urm buildings were built using lime mortar but others were constructed using cement-lime or pure cement mortars.

Tests on debris from damaged buildings revealed that the mortar was often of poor quality.

While bricks remained in good condition, particles in the poor-quality mortars had almost no cohesion or interlocking properties and the mortar crumbled under finger pressure.

This can partly be explained by deterioration over time, variability of the original material used and a combination of climatic conditions.

Water ingress also plays an important part in the alteration process of mortar.

The tests suggested that the lime-based mortars were generally more porous and vulnerable to deterioration than cement.

However mortar and point must allow water vapour to escape otherwise the brickwork builds up dampness.

Urm buildings in Christchurch city that had been retrofitted with earthquake strengthening generally performed well and as expected, suffering only minor or no earthquake damage.

The main damage found was partial or complete collapse of parapets and chimneys.

- Jason Ingham, is an associate professor in the department of civil engineering at the University of Auckland and member of the New Zealand Society for Earthquake Engineering management committee. He will be presenting his findings at a seminar in Queenstown today, organised by the NZSEE, Structural Engineering Society and NZ Geotechnical Society.