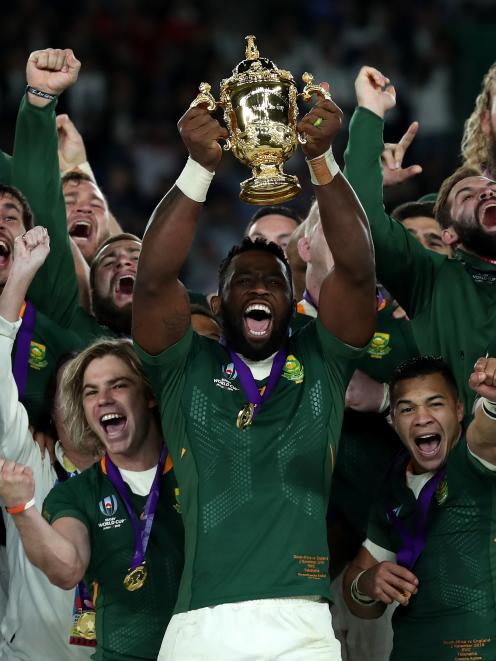 South African captain Siya Kolisi raises the Webb Ellis Cup after their victory in the Rugby World Cup final in Yokohama earlier this month. PHOTO: GETTY IMAGES
The Springbok rugby team has shown we can achieve anything if we work together, writes David Tombs.

The Rugby World Cup final and its aftermath has been a moment of hope and inspiration in South Africa that everyone can celebrate.

Leaving aside the huge disappointment of New Zealand's semifinal defeat to England, it is hard not to acclaim South Africa's achievement and the wider progress it represents. As others have pointed out, when Nelson Mandela wore the green and gold shirt at the 1995 final it marked an iconic moment in the aftermath of apartheid.

Twenty-four years later, and now Siyamthanda "Siya" Kolisi has lifted the cup after the 32-12 win against England in Tokyo.

The South African national side was founded in 1891 and Kolisi is the first black player to captain the team. Speaking after the match, Kolisi signalled what the victory meant for South Africa. The whole country shared in the achievement and could rejoice with the team, and on television Bryan Habana thanked him for "giving South Africa hope".

When Kolisi was asked what winning the cup meant in a country where "rugby is a religion" he replied, "I have never seen, since I have been alive, South Africa like this". Kolisi acknowledged that the country still faced many problems but he was confident that with unity and co-operation the country could overcome these. He added, that winning the cup shows South Africa "we can achieve anything if we work together as one".

Kolisi is well aware of the economic and social problems which still characterise South Africa. He knows how hard life can be for many in the black community.

When he thanked all South Africans for their support, he acknowledged those who watched in the taverns, and the shebeens (township drinking institutions), and the rural areas, and the homeless.

Kolisi himself grew up with his grandparents in the impoverished township of Zwide, near Port Elizabeth. He often had only one meal a day and he slept on the floor. Money was scarce and unemployment was rife, especially among young people, but rugby changed his life. He started playing at age 8, and enjoyed a sport that both his father and grandfather had played, even though this was rare in the township.

At age 12 he impressed a local coach and gained a school sports scholarship. He credits the focus on rugby and the discipline of training for saving him from many of the risks and hazards faced by a teenager in the township.

But his path was not easy and he has always needed to be resourceful.

When he attended a provincial trial he played in his boxers because he did not have proper kit. He watched the 2007 final in a tavern because there was no television at home.

A lot has been written about Kolisi's words of hope, but much less attention has been given to the faith on which they rest. Kolisi had grown up going to church with his grandparents, but difficulties in his personal life earlier this year made him face up to things he wanted to change.

In a piece he contributed to SportGoMag before the world cup, Kolisi explained that he had recently made a personal commitment to Christ. He says, "I decided to lose my life and find it in Christ".

Kolisi now plays with a simple black cross marked on white wristbands, which were seen in the final and as he lifted the cup. As a visible sign of Christian faith, the wrist-cross is well-known in other parts of Africa. It is especially common as a tattoo for Coptic Christians in Egypt.

It is a reminder of Christ's suffering with his arms outstretched on the cross.

When Kolisi arrived back at Johannesburg airport he explained its importance for him:

"Rugby is a beautiful sport, you are allowed to share what you believe in. I had Jesus on my wrist and that is what I believe in. That is what has been carrying me. I owe all the glory to him. Every game that is how I play, with my wrist with that on, that is why I have it on every single game."

You don't have to be Christian to speak with vision, courage and hope, or to want the very best for everyone in your country.

Nonetheless, for Kolisi, his Christian faith was almost certainly at the heart of his belief that if South Africa can come together like the team, then it will be much better prepared to address the daunting social problems the country still faces.

- Prof David Tombs is Howard Paterson Chair of Theology and Public Issues, University of Otago. He is currently conducting a research project in partnership with the School of Religion, Philosophy and Classics at the University of KwaZulu-Natal, South Africa.