Teetering on the edge of turmoil 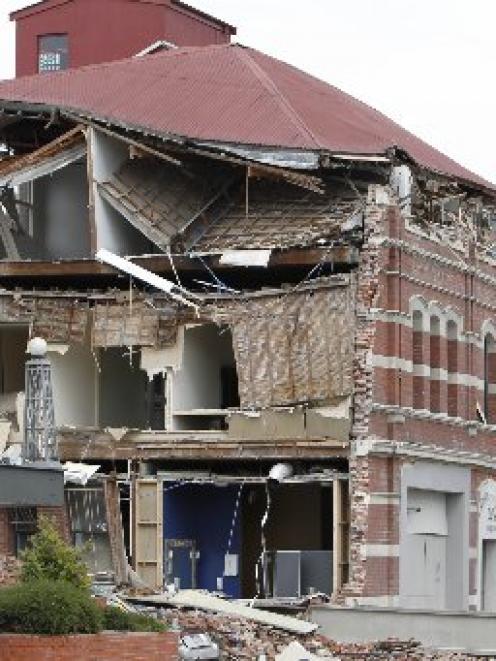 A collapsed building in central Christchurch after February's earthquake. Photo by NZPA.
Faced with a shaken world and a nation losing its compass, it is time to get active, writes Peter Matheson.

What a year! When I began studying theology in Edinburgh, some 50 years ago, Paul Tillich's The Shaking of the Foundations was the book to read. I'm reminded of that today.

The devastation in Christchurch, the grinding down of spirits by the endless after-shakes. The Fukushima catastrophe in Japan. All that.

And the shaking of foundations has been more than physical. "Safe as the Bank of England", we used to say.

Finance houses, banks, mortgage houses, who trusts them any more?

The dimensions of the financial and the economic tsunamis that have hit the US and Europe have not fully registered here yet.

Greece, Italy, Ireland, Portugal all teetering on the edge of social as well as financial turmoil. It's more like the drumming of surf in the distance.

Businesses are leery, though, and we are all vaguely aware that nothing is secure any more, neither jobs, nor savings, nor prospects for our children's futures.

We try to imagine 40% youth unemployment in Spain.

We watch the euro carousel and the demented jousting of Republican candidates in the US. Rationality, it seems, is not exactly in demand these days.

Momentous geo-political shaking-up, too. In the navel of the world the Arab Spring has transformed the shape of alliances and above all of expectations.

A quite new world is emerging, as little forecast by all the high-paid experts as the financial collapse was.

Extraordinary, this virginal enthusiasm for democracy, ordinary men and women putting themselves on the line, defying the whole apparatus of fear: secret police, torture, tanks.

India, China, Brazil increasingly seem to determine the actual shape of the future although the Obamas and the Sarkozys continue to pump out their high-sounding pronouncements.

And what of us in little New Zealand?

While Time names as person of the year "the Protester", our election was a non-event, with shamefully low voter turnout.

It became a sideshow to the Rugby World Cup, and was fought on personality issues.

Today only the Greens are active here. Our pathetic TV did not help.

"Politicians seem to have forgotten that society is not a business," as one of my Waitati neighbours commented immediately after the election.

So are we drifting in the direction of the US, of a disillusionment with the whole democratic process, especially among the growing underclass? This would certainly suit the Epsom voters, with their cynical support of Act.

We do seem to be heading for an increasingly polarised New Zealand.

Given its presuppositions the Poverty Commission will surely be a whitewash.

The poor are a "problem" to be tackled by channelling them into work. Behind this lurks a spiritually barren, utilitarian anthropology. People are valuable solely for their economic contribution to society.

Welfare dependence then becomes a shibboleth for policies which embrace a culturally acceptable inhumanity.

We now take it for granted, too, that clinical expertise for our hospitals or vice-chancellors for our universities can only be lured by stratospheric salaries.

The joke is that in the rest of the world, this apotheosis of the market is on the skids.

We once had a reputation as a reasonably caring society with our provisions for health and education and housing.

As a small country ourselves we championed the cause of others, not least the Pacific nations.

These days we join the obstructionists at Durban to prevent effective action to combat global warming.

What do we stand for any more?

Fortunately, there are considerable forces around which are not enamoured by this drift towards a banana republic.

Peter Matheson is a fellow of the department of theology and religious studies at the University of Otago.