Time for Delta to be brought back into DCC fold 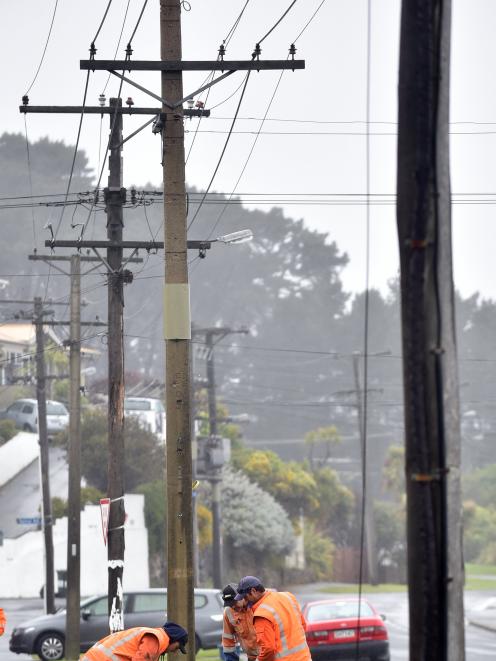 Delta is under the pump over its management of Aurora's electricity network. Photo by Peter McIntosh.
What is this thing called Delta, the organisation which manages Aurora Energy’s electricity network in Dunedin and Central Otago, asks Hilary Calvert.

Delta does not follow the rules of a central government creature, or we would by now have seen the forced resignation of both the chief executive and the board members.

Usually, ministers take a dim view of being made to look fools, especially where members of the public and employees have been put at risk.

Then there is the matter of providing successive annual budgets which did not mention deferred maintenance, and the announcement that to avoid the public relations fallout, $30million dollars would be found, without consulting the owners.

Delta is not a part of the DCC, or it would have been under DCC rules in regard to payment of staff salaries, health and safety, the whistle-blower regime and the management of vehicles.

For example, the head of department would be paid as the heads of other council departments are paid, not with a highly inflated sum significantly more than our current chief executive.

The money spent on directors would not be needed, and those who worked for the department would be directly accountable to the chief executive of the DCC, who is accountable to all of us.

If there was any suggestion staff were not complying with public and staff safety, the chief executive of the DCC would be expected to front up to the council, and in an extreme situation would be expected to resign, ahead of the public wanting to know whether we had to pay redundancy for such a lapse of appropriate management.

If Delta were a department of the DCC, it would have in place the DCC whistle-blower regime intended to encourage people to speak up and tell others of practices which are not right within the organisation, rather than being told he should have shut up and kept his head down.

As a DCC department, Delta would be subject to recent council rules concerning vehicles, whereby the council knows where vehicles are at all times, the people who have vehicles for private use are few, and the taking home of vehicles would be restricted to those who were on call on the night in question.

Delta is not a normal commercial company, or it would have other commercial and financial controls.

When the shareholder is a parent company, as it is with DCHL, the directors of that company would also be in the firing line.

In a public company, there would not be directors who seem to be incapable of understanding that to pay dividends, either there needs to be profit made by the company, or the money must be found from borrowing.

If keeping a company healthy was as simple as the shareholders demanding payment of dividends and the CEO complying with such demands, other local companies, such as DC Ross, could have used this approach to save themselves.

These things would happen with a public company as it went bankrupt, something Delta is protected from because it has a shareholder which can demand ratepayers prop it up forever.

What Delta does seem to be is an expensive and embarrassing organisation with the ability to defy the normal rules, and where no-one is prepared to take responsibility for the choices it makes using our money.

All is not lost, however. We could accept that Delta/Aurora is unable to be controlled by its owners, us, and that this bold experiment in letting others manage public assets and risk ratepayer's capital, has failed.

The DCC could then close down Delta as we know it, either by sale or by bringing the organisation back under DCC control.

We don't need to wait for the results of any inquiries, interesting though these may be: the underlying weakness will remain.

Neither does it seem to be achieving much to ask for advice from DCHL about what it thinks, since it has been complicit in the arrangements which got us to this position.

It is time for some leadership which addresses the issues, takes charge of our assets, and puts our council squarely in the driver's seat again.

-Hilary Calvert is a businesswoman and former Dunedin city councillor.