Time to put brakes on cycleway 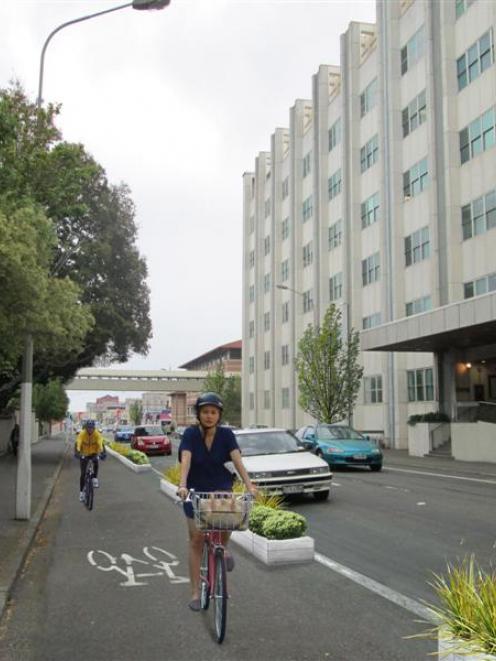 Done deal? A slice of a proposed cycleway on State Highway 1 opposite Dunedin Public Hospital. Image from New Zealand Transport Agency.
The Dunedin City Council is sleep-walking to yet another poorly thought out cycleway project, writes Cr Hilary Calvert. Can the council not stop and have a better look at the State Highway 1 proposal?

Somehow, the Dunedin City Council has been so beguiled by the gift-horse that is the New Zealand Transport Agency (NZTA) that it seems to have completely forgotten to carry out its proper role of looking after the interests of the citizens of Dunedin in respect of the State Highway 1 cycleway plans.

Cycle safety plans along SH1 require funding from NZTA and acceptance by council of the flow-on costs to the citizens of Dunedin. But the council seems to be taking no part in this process.

There has been no provision for any costs to ratepayers in the long-term plan consultation process.

There have been no attempts to deal with parking revenue reduction.

There have been no joint endeavours to find an option that looks at both the NZTA safety issues and the effects on those who use our streets, parks and footpaths.

There has been no challenge to the NZTA about how its idea of the number of cycleway users in the future would require an entire lane along two streets following essentially the same route.

Three years ago, the council was concerned about cycle safety along the one-way streets and asked NZTA to look into cycleway options.

NZTA took up the challenge and in in May 2013 it came to the council with a progress report.

The council resolved the eastern footpath of the one way north be considered as a long-term separated cycleway (Cr Jinty MacTavish voting against).

By September 2013, two options were being considered by NZTA, option 1 involving a separated bicycle facility (SBF) along both one-way streets, and option 2 an SBF for cycle travel both ways down only one street.

These were consulted on and more strongly supported option 2, losing an expected 185 parks, over option 1, losing 391 parks (both before any possible Council mitigation of parking losses).

A moderated version of option 1 (called 1A) was then found, losing 198 parks.

On April 1, 2014 the council identified the next key decision point about whether the project proceeds was when an indicative business case was completed, at which time the report would be presented to the infrastructure services committee for consideration.

Since then the council has heard nothing.

The public has become increasingly concerned about this issue, as evidenced by various articles and letters in the ODT.

The museum (parking), the AA and businesses threatened with losing their parking have all raised concerns.

And now it seems the council is effectively out of the loop and the NZTA will decide which, if any, plan will go ahead. The NZTA says that options 2 and 1A have been all but dropped and a loss of 370 parks is included in the plan.

Dave Cull says that ''we're confident that we can mitigate any parking losses, and we may end up in a better position in terms of car parks''.

How this could happen was not specified. The chairwoman of the infrastructure services committee, Kate Wilson, says: ''Infrastructure needs to change over time, and they're never cheap.

The choice about whether to build it, or whether there might be one or two cycleways seems to have been made behind closed doors in secret meetings by NZTA.

Our mayor and the chairwoman of the infrastructure services committee seem to be treating this as a done deal, requiring the only council input to be to see if we can mitigate some parking concerns.

It has not come back to the council, as per the resolutions of April Fool's Day 2014.

It is clear there have been meetings behind doors by various so-called stakeholders, where the proposal with less effect on parking, favoured during consultation, has been scrapped in favour of a proposal of a loss of almost 400 parks before mitigation.

This is not totally the fault of NZTA. Its position seems to be it has completed its side of the bargain, and the flow-on effects and loss of parking are none of its concern.

The council has given up its control of the situation without ever having confronted the choices or costs to our citizens. It is time for the council to call time out.

It is time for the council to have a proper think about the changing needs of our citizens and whether there are alternatives and/or better options available than the ''my way or the highway'' proposal that seems to have been decided on by NZTA.

This may include rethinking the two-way pair or shared paths as originally considered three years ago and would certainly involve a need to be conscious of the parking impacts, lost city revenue and general convenience to road users.

We should not ignore the wishes of the people, in favour of letting the NZTA dictate our future. There are no free cycleways.