Tough decisions to be made 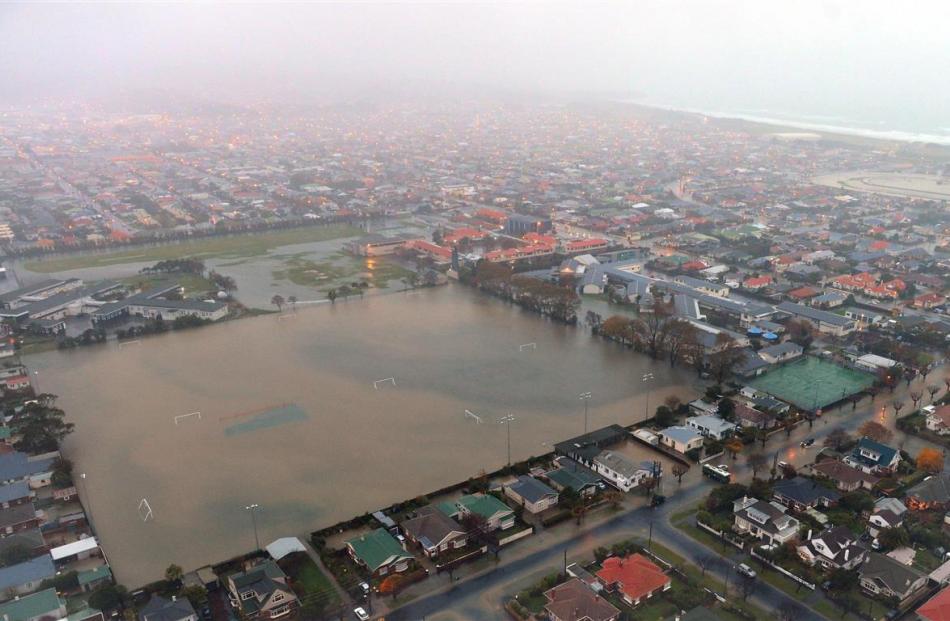 Tonga Park is under water in the floods which inundated south Dunedin in June. Photo by Stephen Jaquiery.

Courage on everyone's part, and some tough conversations are required in the Dunedin's battle against sea level rises, writes Mayor Dave Cull.

Over the past few years the effects of climate change have crept up on Dunedin - albeit in full view.

Now we must act.

We must act to adapt to what is happening, and we must act to slow down or mitigate the rate at which the effects get worse.

Since 2008, central government has advised councils to allow for sea-level rise as a result of climate change when planning for development or infrastructure investment.

Currently, that advice is to allow for 1m over the next 100 years.

The Otago Regional Council (ORC) sea-level gauge at Green Island, installed in 2002, shows an average sea-level rise of 3.3mm per annum, much faster than the long-term average for Dunedin.

He predicted climate change and sea-level rise would increase the frequency of large-scale, long-duration flooding events in Dunedin.

The council has subsequently done more work on the issue, particularly in South Dunedin.

That includes the 2014 Beca report.

It explored possible responses including pumping groundwater to the sea.

In June 2015 Dunedin suffered an extreme rain event which caused serious flooding in South Dunedin, Mosgiel and other parts of the city.

In November 2015, the Parliamentary Commissioner for the Environment published a report about how sea-level rise would affect New Zealand.

It showed sea levels had risen about 200mm over the past 100 years and are expected to rise faster in the future.

It found that Dunedin is the most extensively and severely affected centre in New Zealand and explained that the main problem here is groundwater levels being forced up by rising sea levels.

This has two principal effects.

Firstly, groundwater ponding on the surface and damaging or compromising homes, infrastructure and businesses.

As a result, in prolonged or intense rain events the stormwater system will have to cope with more run-off than it was designed for.

In November, DCC staff tabled an extensive report on the performance of South Dunedin's stormwater infrastructure during the June floods.

They carried out a thorough stormwater system inspection, did extensive modelling, examined records of groundwater levels in South Dunedin and compared it with a comparable rain event in 1968.

Their findings reinforced those of the Parliamentary Commissioner.

ORC gauges showed that in June the groundwater levels in South Dunedin were very high - in some cases virtually at the surface.

That meant almost no rain could seep into the soil.

All the runoff had to flow into the stormwater drains.

As a result, the stormwater system filled up very quickly and as the stormwater pumping capacity (into Otago Harbour) was less than the volume of rain that continued to fall, the excess water backed up and flooded.

What can we conclude from all that and what can Dunedin look forward to?

First, we know that just a tiny rise in sea level will cause periodic ponding in parts of the city - whether it rains or not.

So given the rate of sea-level rise we know is happening, we can expect surface flooding with increasing frequency.

Secondly, extreme rain events will happen more often and will cause flooding, particularly when groundwater levels are high.

The severity depends on various factors including high-tide times.

Parts of South Dunedin, in particular, will over time become unviable for habitation unless something major is done.

That could include larger stormwater pipes and pumps, groundwater drainage by way of bores, canals and pumps, impermeable underground water barriers, raising ground levels, retreat and reversion to wetland in some areas and probably more that we as yet don't know about.

Indeed, there is a huge amount we still need to understand about what is happening, what our options in response are and which of those might work.

Huge cost will be involved whether something is done or not, and doing nothing is not an option.

The council recently called for a comprehensive study of the whole situation including what the possible responses might be.

We also need to identify opportunities.

Opportunities to improve a sometimes neglected part of the city, to replace housing that is no longer fit for purpose and to ensure as much as possible that people in the South Dunedin community are better off in the long run.

The council has also endorsed the development of a comprehensive emissions reduction plan for the city, recognising that the world needs to transition to a low carbon economy if we are to avoid the worst effects of climate change.

That's the mitigation part of our response to climate change.

The challenge for Dunedin - scientific, engineering, social and financial - is enormous.

It will take courage on everyone's part, and some tough conversations.

But if we are proactive, innovative and work with the whole community, the end result will be positive for the whole of Dunedin.