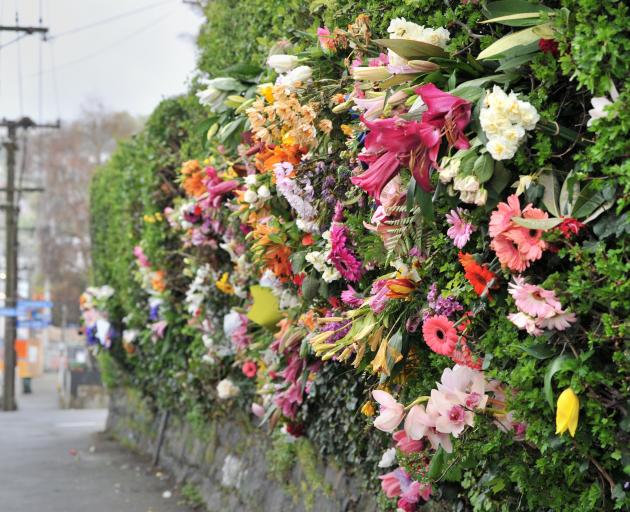 Flowers in the hedge outside the Dundas St flat where Sophia Crestani died. PHOTO: CHRISTINE O'CONNOR
In trauma and in tragedy, we can also experience the very best of humanity, writes Lynne Taylor.

I noticed the rubbish on the pavement of Dundas Street as I drove home the evening after Sophia Crestani's tragic death. I thought briefly about stopping, but the lack of anything but my bare hands to gather and contain the broken glass meant that it wasn't practical.

When I passed the next day, the rubbish was gone. Instead, I witnessed two young women share a hongi, then embrace, in front of the hedge which was newly awash in colourful flowers.

This exchange, this colour, this tidiness was, I realised, a small measure of transformation: a sign of hope and courage in the darkest of situations.

When our world is shaken, as it was on Saturday October 5, it is easy to move to blame and to speculation. We saw that in some reports and comments, particularly on social media. Amidst the beautiful expressions of sadness, grief, aroha, and regret, there was finger-pointing and conjecture.

That is natural: it is part of being human. In fact, the first story of human transgression was characterised by blame, as Adam unfairly pointed his finger at Eve, who had given him the fruit that they had both enjoyed. Blame is what we do.

But thankfully, blame and speculation are not all that we do. In trauma and in tragedy, we can also experience the very best of humanity.

Creating, particularly creating space, was seen in the quick responses of the University and OUSA, working to create places for students and the wider community to grieve.

The tribute wall in the Union Courtyard enabled people to creatively express grief and solidarity, as did memorial spaces set up in Colleges. Space to grieve was also created by those who placed flowers in the hedge outside ``The Manor''. Such spaces are significant in personal and collective grieving.

As well as creating space to acknowledge grief and solidarity, we need to help ease the pain of those who suffer. Pain-bearing occurred through the drop-in centre established in the University Common Room, and through the formal and informal gatherings of students who knew and loved Sophia. Pain-bearing also occurred in the quiet conversations, in the presence of parents who travelled to be with their children, in the reaching out, and in the checking in.

This pain-bearing must continue long after the flowers have faded. Most obviously, for Sophia's family and friends.

We are already seeing glimpses beyond creating space and bearing pain. Life-giving transformation occurred as the site of the tragedy was cleaned and infused with the colour of flowers and the sharing of aroha. Transformation spread through North Dunedin last Sunday, as 2500 people gathered at Sophia's parents' request, to further clean up the streets.

We trust that further transformation will occur once the investigation into the events surrounding Sophia's death has been completed. As a society, we have processes that help ensure that such tragedies do not occur: or at least, are not repeated.

At the same time, as University students and staff, as parents, as landlords, as residents, and as the public we are all invited to consider our actions and inactions - not because we are to blame, but because we long for a world that is free from pain and suffering.

My attention to the good that I have observed (in creating space, pain-bearing and transforming) is by no means to downplay the enormity of the tragedy that has occurred. A beautiful young life has been lost. Scores of others have been traumatised by what occurred that night. I am also aware that some hurting people may have fallen through the cracks. Some may feel unsupported and broken. Please seek help. Reach out - there are certainly people who care for you. Contact the chaplaincy team, Student Health, Lifeline or free call/text 1737.

For all of us, let us take time to empathise and to hold space for people. May we work to bear the pain of others, and in doing so know that we are not alone in our pain. Let us move towards transformation by acts of cleaning and caring and changing what needs to be changed. In these ways, our world (and ourselves) will be made more whole and more wonderful.

- Lynne Taylor is Jack Somerville Lecturer in Pastoral Theology in the University of Otago's Theology Programme. She teaches in the areas of pastoral care and chaplaincy.