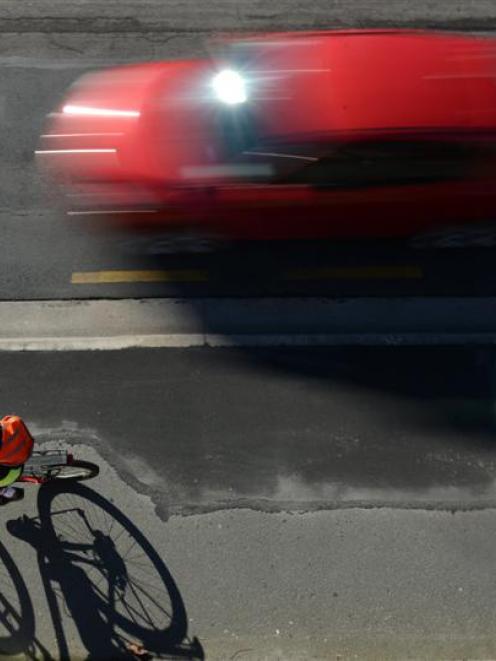 A cyclist on the shared pedestrian/cycle way, in Thomas Burns St, Dunedin. Photo by Gerard O'Brien.
Dunedin resident Phil Cole argues it is vitally important any long-term transport planning for the city is determined not by short-term populist ideas but by long-term growth based on economic conditions, city development and people's habits.

It is good to see the city council considering pedestrian-only areas and responsibility for running the public bus system, projects argued and discussed at the last several annual plan hearings.

However, unless these projects are taken in a wider context they will end up a dismal failure of a piecemeal approach to one of the core services a council should provide - the movement of its citizens around a city.

Dunedin has its own unique geographic, demographic and historical features that make any transportation planning in the city reliant on forward-thinking, rather than academic theoretical practices.

The historical past of Dunedin's transportation, however, should only be ignored at its peril.

It is vitally important for Dunedin's direction that any long-term transport planning is determined not by short-term populist ideas but by long-term growth, based on economic conditions, city development and people's habits.

It is equally important council land-use planning is closely aligned to, but does not determine, how the city can be rejuvenated.

People's habits relate to personal choices in the way they buy goods, visit the city centre and seek entertainment.

As they become more accustomed to purchasing items online this will have a knock-on effect of visiting the city centre less often for shopping.

With ever-increasing rent rises by landlords and unsustainable rates rises by the council, yet more shops will be forced to either relocate or cease trading in the CBD.

If the CBD is to survive, it needs to adapt and change.

Other parts of the city are re-awakening after periods of slumber, the Exchange area being the most obvious example due to entrepreneurial building owners and sympathetic landlords.

With the potential of the warehouse area immediately south of the Exchange, history could repeat itself and the Exchange area become the hub of the city once more, as it was in the first half of the 20th century.

The council has hamstrung itself to a degree regarding transportation by going ahead with an ambitious cycle lane strategy which is appearing around Dunedin and follows on from the peninsula cycleway, both projects heavily funded by the NZTA with council contributions.

A transport policy based on a particular form of transport being heavily financed by a government organisation is not the correct way to determine the transport requirements of Dunedin, especially when these national policies can change every three years under the direction of a different government.

Dunedin must determine for itself the best public and private (vehicle owners) transport system that will meet the needs of the majority of its residents with a view to Dunedin's future.

To do this the city council must take control of running the bus system as soon as possible - not two years or more down the line - and develop a public transport system relevant to the travelling needs of the Dunedin public.

Making changes piecemeal fashion, without the essential ingredients, will end up in disaster for Dunedin, in terms of its residents and businesses.

How many people use the State Highway 1 cycle lanes - not many?

Why do businesses/residents complain when they lose parking spaces (or ''car storage'' spaces)?

Because there is no effective public transport system to replace them.

The whole mix needs to be considered and addressed city-wide and not in local or small areas (like the idea of pedestrianising the Octagon).

While pedestrian areas are nothing new and are to be encouraged, they need to be part of a city-wide strategy and not as an isolated example, as in the Lower Octagon.

Some areas will benefit hugely from pedestrian areas while other areas will not.

In towns where pedestrian areas have been successful - both in increased business turnover and people using the areas - it has been due to the excellent public transport services serving the centre from the surrounding areas and also allowing for car parking for personal travel.

It is all about giving people choice.

The city council now has a tremendous opportunity over the next two years, before it takes control of the buses, to consult interested private car owners, bus users, cyclists and pedestrians to come up with a public transport system that will be well used and beneficial to all parts of Dunedin socioeconomic groups.

There will continue to be a significant ongoing decline of traditional shops in the CBD, and food, beverages and entertainment taking their place.

How the main thoroughfare of George St and Princes St adapts in the face of technological challenges and a new transport structure will determine the future of the CBD and other areas of Dunedin.