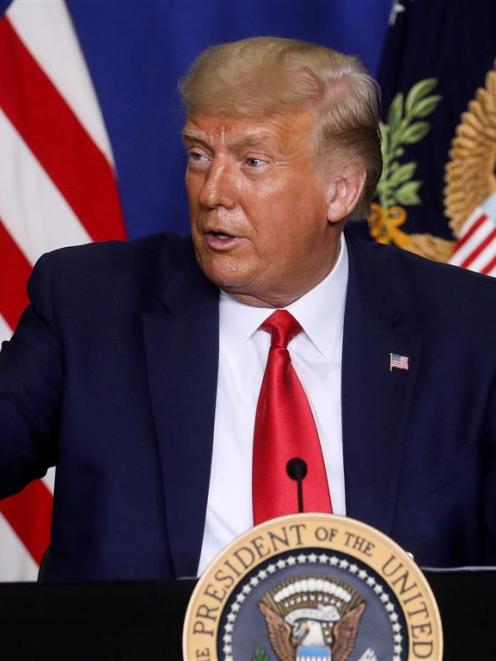 Donald Trump. Photo: ODT files
Only a fool would write off Donald Trump in the coming United States election. But there’s a reason he is so desperate, writes American academic Michael A. Cohen.

From afar, the 2020 United States presidential election must look like something akin to a dumpster fire, on top of a tyre fire, during a hurricane. It certainly feels that way to many Americans.

But if one looks closer, the outlines of the presidential race are quite clear and have been for some time: Donald Trump, the incumbent, is deeply unpopular with the American people, is trailing badly in opinion polls and there is little indication that this will change in the five weeks until election day.

Indeed, the defining characteristic of the Trump era in US politics is that Americans don’t like the president. Never during his nearly four years in office has Trump surpassed 50% in surveys. Since the autumn of 2019, Trump has never led Democratic nominee Joe Biden in head-to-head polling. The closest he came was in late February, before Covid-19 hit the United States, when he trailed by four points.

If one wants to go back further, since Trump unexpectedly won the White House in 2016, the electoral story has been one of almost constant political backlash. Democrats consistently overperformed in special elections throughout 2017 and 2018, including winning a Senate seat in Alabama, one of the most conservative states. In the 2018 midterms for Congress, Democrats won the popular vote by a larger margin than in any such election in more than four decades.

One might imagine that a pandemic, incompetently handled by a president who was recorded admitting he lied to Americans about how deadly it could be, leading to the deaths of more than 200,000 people in just over six months, would further erode Trump’s support.

However, this is the president’s political ace in the hole: his floor of support — around 42% or 43% of the US electorate — has been largely unchanged even in the era of Covid-19. Trump once joked that he could shoot someone in New York’s Fifth Avenue and not lose any support. For the first time in his life, he was guilty of understatement. In reality, he has directly contributed to the deaths of more than 200,000 people and paid barely any political price.

Why so many Americans continue to support such a clearly incompetent and malevolent president is a question for another day. What matters for the election is that Trump is not winning over any converts. No matter what happens politically, the numbers don’t dramatically shift.

Last month’s nominating conventions usually give each candidate a bounce in the polls. It didn’t happen this time. It was thought that violence in US cities, after the shooting of unarmed black men by police, would boost Trump’s standing among suburban, law-and-order-focused voters. The opposite occurred. The president’s intemperate response seemed to bolster Biden. Even the selection of a conservative justice to replace Ruth Bader Ginsburg on the supreme court is unlikely to boost Trump’s chances.

This week, Trump and Biden will meet for the first of three presidential debates. If the past few months are any indication, these will create plenty of sound and fury . . . but it will probably signify nothing.

US voters already know how they feel about Trump. Even if Biden, who has so far run a near flawless campaign, wanted to mess things up for himself, I’m not sure how he would do it.

It’s practically impossible to capture the burning desire of millions of Americans to rid the nation of Trump, but here’s one example. Earlier this month, the state of Virginia opened in-person early voting. In a Democratic-leaning district, hundreds of people queued from early in the morning to wait in line for hours to cast their ballot — 50 days before election day. Indeed, every day that goes by without Trump erasing his polling deficit makes it that much harder for him to win. By next week, more than a million Americans will have participated in early voting. In the battleground state of North Carolina, 20% of all requested mail-in ballots have already been sent back.

This is one reason why the president continues to cast doubt on postal balloting, which has increased because of Covid-19, and last week even refused to say that he would commit to a peaceful transition of power if he lost. Suffice to say, such a refusal has never happened before in US history and is a fast path to authoritarianism if Trump follows through on it.

In addition, for weeks now, Trump has been saying that any electoral verdict in which he does not win would represent a rigged outcome. Since he is clearly losing, he is trying to make the results appear illegitimate in the hope that he can then use legal challenges and Republican enablers in swing states to subvert the results.

While it would be wrong to completely write off these efforts — or underplay the danger they represent to America’s already diminished democratic legitimacy — it would take an extraordinary confluence of events for Trump to succeed with such a strategy. Moreover, while there has been little change in the polls for months, only a fool — or someone who has blotted out from their memory the 2016 election — would say Trump cannot win. But it’s worth noting that many of the presidential forecasts that Democrats obsessively check each day consider a Biden landslide as likely — if not more so — than any Trump victory. Anything can happen, but the most likely outcome is increasingly hard to ignore. — Guardian News & Media

He has destroyed ISIS and brought peace between Israel and the UAE.

Just a sample of his achievements.

If only Ardern could be as "incompetent and malevolent"!

Yes, this is an "opinion" piece, but some opinions are clearly ignorant and biased.