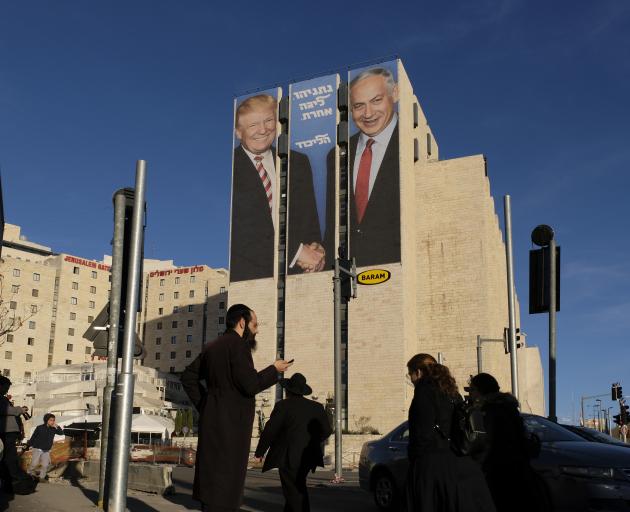 US President Trump and Israel PM Netanyahu on a campaign poster in Jerusalem. Photo: Getty Images
In this column for the American Tribune News Service, Victor Davis Hanson argues the Israel-US model has been a resounding success.

Whether by accident or by deliberate osmosis, Israel and the United States have adopted similar solutions to their existential problems.

Before 2002, during the various Palestinian intifadas, Israel suffered hundreds of deaths and thousands of injuries from suicide bombers freely crossing from the West Bank and Gaza into Israel.

In response, Israel planned a vast border barrier. The international community was outraged. The Israeli left called the idea nothing short of ‘‘apartheid.’’

However, after the completion of the 708km border barrier — part concrete well, part wire fencing — suicide bombings and terrorist incursions into Israel declined to almost nil.

The wall was not entirely responsible for enhanced Israeli security. But it freed up border manpower to patrol more vigorously. The barrier also was integrated with electronic surveillance and tougher laws against illegal immigration.

The wall also brought strategic and political clarity. Those who damned Israel but freely crossed its borders sounded incoherent when they became furious the barrier prevented access to the hated Zionist entity.

The Trump administration is seeking funds to create new border walls and replace old, porous fencing in order to stem illegal immigration on the southern border.

The strategy seems similar: the wall will free up manpower for better border policing. It likewise provides a certain political clarity. The United States is often criticised by Mexico and other Latin American countries. It is now being taken to task for the effort to make it more difficult to illegally enter such a supposedly unwelcome and hostile landscape.

For years, Israel’s great weakness was its dependence on imported energy, while its neighbouring enemies grew rich exporting oil and natural gas. Yet in the last decade, Israel has ramped up production to take advantage of its vast natural gas reserves — to the point that it is not just self-sufficient in fossil fuels but soon will become a major exporter.

Now, Israel cannot be threatened economically by either Iran or various Persian Gulf monarchies. Its economy is stronger than ever. Europeans suddenly are more accommodating, given that Israel may well become a natural gas exporter to a fuel-hungry Europe.

Like Israel, but unlike Europe, the US was eager to frack and horizontally drill to tap vast new fossil fuel reserves. The change in US strategic energy independence is similarly astounding.

America is now the largest producer of natural gas and oil in the world. Its output has increased world supply, dropped prices and hurt America’s oil-exporting enemies.

The relative power of Russia and Middle Eastern nations, such as Iran, over US decision-making has radically diminished — along with the need to station huge numbers of American troops in the volatile Middle East.

As in Israel, opponents either argued that more drilling would ruin the environment or that it would not work. They seem to be wrong on both counts.

In the topsy-turvy Middle East, Israel is now sometimes a strategic partner with formerly hostile regimes in Egypt, Jordan, Saudi Arabia and other Gulf monarchies. They all share greater fears of theocratic Iran and its terrorist appendages in Lebanon, Syria and Yemen.

Apparently, much of the Arab world is no longer as interested in the Palestinian desire to destroy Israel. Many Palestinian groups are allied with a despised Iran, while many Arabs believe Israel’s strength can sometimes be strategically useful.

American realism is similar. The US is neither isolationist nor an interventionist nation-builder. Its foreign-policy goals are to enhance its military, expand its already powerful economy, limit its strategic exposure and bank its resulting hard and soft power to use only as a deterrent force against those who kill Americans or endanger US interests.

Instead of cajoling allies to join us in expeditionary wars abroad, the US increasingly appears reluctant to intervene, especially in the Middle East. As a result, former critics are now becoming suppliants requesting US assistance.

As with Israel, the US is less eager to apply political litmus tests to its occasional allies. It also seeks to avoid quagmires where its overwhelming conventional firepower can be neutralised by terrorists and urban guerrillas.

The promoters of these unconventional policies, Israeli Prime Minister Benjamin Netanyahu and US President Donald Trump, are both despised by their respective establishments and under constant threat of removal by their livid political opponents.

Yet they both have transformed their respective countries. Their policies remind us that it is sometimes preferable to be respected rather than just be liked — and that when a nation is strong and does not beg for help, it often finds more than it needs. — TNS

- Victor Davis Hanson is a classicist and historian at the Hoover Institution, Stanford University, and the author of ‘The Second World Wars: How the First Global Conflict Was Fought and Won.

Nicely written and so true.

"Yet they both have transformed their respective countries. Their policies remind us that it is sometimes preferable to be respected rather than just be liked — and that when a nation is strong and does not beg for help, it often finds more than it needs."

It's not just nations that this works for. It's the basis that sound investments are made on and why our current social welfare system is so broken.
This endless bleating by our elites and social commentators, about identity and repression, increases their status as progressive, woke, social justice warriors but hurts the very people they claim to be standing up for.
Be strong, work hard, be independent, seize opportunity, prove yourself, be consistent, respect yourself and others.
That is how you will prosper, be able to support those you love and bring peace to your world.

The fact that the Democratic presidential candidate Gabby Tulsard is suing Hillary Clinton for US $50 million means the party has problems. Hillary Clinton said that Ms Tulsard is being groomed by the Russians prompting the lawsuit.

Hanson is a well known noecon, a supporter of both Bushes, Trump and Rumsfeld.
Hanson praises the Trump administration for its "inspired" and "impressive" Cabinet members.
He authored a 2019 book "The Case for Trump".
Unsurprising he will praise this white house.