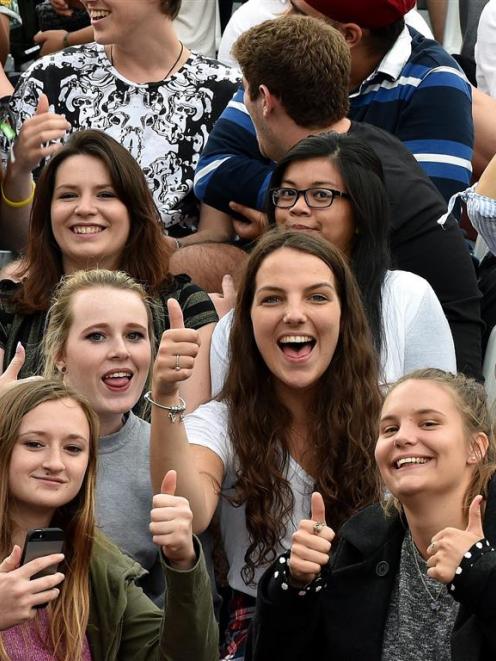 This year, more than 3000 young women and men have chosen to commence their tertiary education at the University of Otago.

These students are included in the newly released enrolment figures published in the ODT this week.

It is easy to think of students as a monolithic group, and to draw generalisations about the student community.

Recently, national media commentators have taken pot-shots from afar, with one describing our student population as arrogant rich kids having fun.

I find it impossible to reconcile sweeping comments like this with what I have come to know of our students.

Yes, a small minority of our more than 20,000 students sometimes behave in unacceptable ways.

However, to tar our entire student community with this brush is untrue and unjust.

In reality, the quality and diversity of our student intake is increasing year by year, with the class of 2016 the most accomplished intake ever.

I have chatted to members of our commencing class of 2016 in a range of settings: at my pre-orientation lectures; at our hugely popular sports day at Logan Park; at a range of Orientation events; at the various welcomes we hold for our entrance scholarship winners; and often just out-and-about on our campus.

Time and time again, I have been left in awe by what these mainly 18- and 19-year-olds have told me about their lives so far, and their goals for the future.

That many are stellar academically comes as no surprise: roughly a quarter of our first-year students this year have achieved NCEA level 3 with the highest possible standard of excellence endorsed.

Many have achieved outstanding results in NCEA scholarship, International Baccalaureate, or Cambridge examinations.

About 100 were duxes of their high school prior to coming to Otago.

Students' involvement in extracurricular activities has left me, and my senior colleagues, feeling somewhat inadequate in respect of what we did with the first 18 years of our lives: I have chatted to numerous young men and women about their representing New Zealand in sporting and cultural pursuits; about extraordinary achievement in charitable fundraising and service to their communities; I even met one young man - a Central Otago lad - who last year wrote and published a sizeable book (the proceeds of which are going to charity).

I see extraordinary diversity in ethnic and cultural backgrounds from within both New Zealand and from overseas.

With this year's intake drawn from more than 300 secondary and district high schools, it's little wonder that when I ask these young students where they come from, many name small towns and localities that most of us would be unable to place on a map.

Asking how the costs of their studies are being covered, I am privy to frank and often humbling accounts of the sacrifices some families are making to give their son or daughter an Otago education, and about the role our scholarships play in making university study a reality for some.

The frequency with which I hear these stories squares with the evidence we have using the decile rankings of schools as a proxy, admittedly imperfect, for the financial resources of our students' families: about 40% of Otago's commencing cohort of 2016 come from schools ranked at decile seven or below.

When I ask about their reasons for choosing Otago, I find - unsurprisingly - that many are following in the footsteps of parents or siblings.

But I also find large numbers (around a third of all students) who are - as I was - the first in their family to attend a university.

The stories they share with me about their journey to university and the honesty with which they share them, remains one of the greatest gifts they give me in my role as vice-chancellor. Amid all of this diversity, I have observed two striking themes of consistency.

The first theme is that these students are proud to have chosen Otago as their university and Dunedin as their hometown for the next few years.

Some say it was always going to be Otago.

Others admit they made a tough choice, but they already have great confidence that the biggest decision they have made so far in their lives was the right one.

While academic reputation is the primary reason they give for choosing Otago, they also frequently mention the desire to be part of a true university community, spreading their wings away from home in a vibrant, charming and beautiful student town.

They frequently contrast this with what they believe would have been a soulless, less welcoming experience elsewhere.

The second consistent theme is a strong desire to succeed at university; these young people have some place to go and they know what they need to do to get there.

Next time you hear an uninformed quip or generalisation about students from Otago, please take the time to remember that our students are a diverse group with an incredible amount to offer.

We are fortunate to have these young people as part of our community and the actions of a few poorly behaved individuals should not distort the positive reputation the vast majority deserve.