Untabled facts tell a different story, of danger and disaster 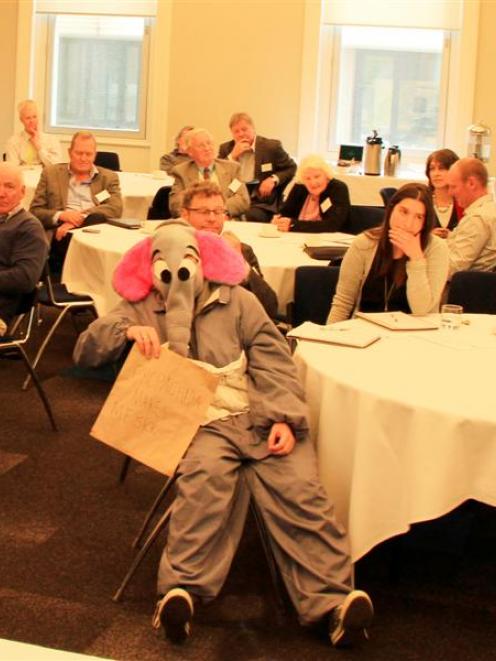 The decision whether to drill down to 4km in 1.5km-deep water in the Great South Basin (GSB), about 150km off Dunedin, will be made later this year. Seismic surveys suggest a 70% chance of finding nothing, a 30% chance of gas and a 1% chance of oil.

It's gas they were after, Shell said, not oil.

How credible is this claim?

The technology to liquefy gas at sea is still unproven. Our back yard would be Shell's testing ground for its not-yet-built FLNG (floating liquefied natural gas vessel); four soccer fields long, six times heavier than the biggest aircraft carrier and holding 174 Olympic swimming pools worth of liquefied gas chilled to -162degC. A gas find would have to be massive to be economically viable. Is Shell playing down its expectation of oil to allay fears of the oil-on-beaches image, so real since Rena?

That's not to say a gas blowout wouldn't be destructive. Gas could boil to the surface and kill rafting birds such as albatross - in Shell's words, a ''moderate'' impact.

Such accidents happen even where help is at hand, let alone in a region as remote as the GSB. In the North Sea, a leak at the Elgin platform spewed 200,000cu m of gas per day. It cost $3 billion and took six months to drill relief wells to stop the leak.

But Shell assured the meeting it ''will design the well to the highest industry safety standards''.

How high are these safety standards?

It emphasised its injury record in a graph whose unexplained y-axis, ranging from zero to five, hinted at low numbers but turned out to be ''number of injuries per million working hours''. To give some meaning to this scale, the UK, whose injury record is four times better than ours, had about 130 major or fatal injuries per 100,000 workers last year.

Until 2011, there was only one inspector to oversee our entire oil and gas industry. Now there are three; still poor compared with other countries.

What of Shell's environmental safety standards?

''Environmental concerns are very close to our heart,'' Shell repeated (no less than five times) while showing photographs of whale, albatross and shearwater, and the entrance to a local marae.

However, Shell's environmental, social and health impact assessment had not been completed, so there was little of substance to present. Niwa's Tangaroa had just returned from another seabed survey and although the data hadn't yet been analysed, it did not stop Shell's environmental officer from pre-empting the findings: ''As you can see, not much there,'' he repeated as Tangaroa's cameras cruised the seabed. A diagram showing marine migration routes passing either side of the proposed drill site backed up the story of an empty ocean - ''no fishing, no tourism, no infrastructure''.

But details of migration, breeding and feeding patterns are virtually unknown for most of our southern ocean creatures. We know little about what our Taiaroa Head albatrosses get up to when away from home. We do know the southern ocean is home to the greatest number and variety of albatrosses and other sea birds in the world.

What other facts did Shell leave off the table?

Oil and gas spills happen all the time. The 2010 Horizon disaster in the Gulf of Mexico is only extraordinary in terms of scale. Between 2001 and 2010 in the Gulf alone, there were 855 fires or explosions, 1349 injuries and 69 deaths.

The Montara blowout of 2009 off the coast of Perth, at a depth of 80m, took two and a-half months to plug and destroyed about 64,000ha of coral reefs off Timor. This equates to one Rena disaster every day for 74 days.

Back to Shell. Let's lay some more facts on the table.

In February this year Shell pulled out of the Arctic after a drill-ship grounding, engine failures, a fire on one of its rigs and other technical difficulties.

Shell has been censured 25 times in the past six years for breaking safety rules, but has a history of under-reporting such incidents, let alone laying them on the table in community engagement workshops.

But actually, I agree with Shell; why bother to mention such things?

Companies like Shell already have enough proven oil, gas and coal reserves on their books to raise the atmospheric temperature to five times beyond the so-called ''safe'' two-degree limit. Once burned, it's goodbye future for our grandchildren.

Oil spills, dubious safety records, crimes against humanity pale in comparison to the future impacts of climate change, the elephant in the room, so studiously omitted from the table at Shell's community engagement workshop.