We must keep remembering 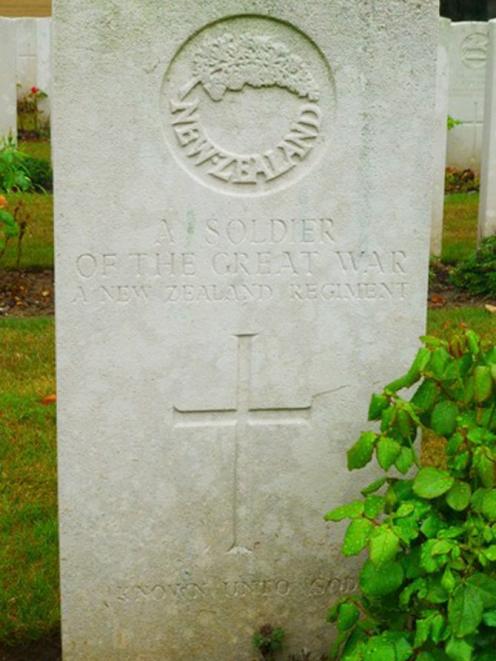 The grave of an unidentified New Zealand soldier at Gommecourt British Cemetery No.2, Hebuterne, France. PHOTO: JAMES HARDING
James Harding explains why we must remember World War 1 and why it is imperative we find a way to learn from the costly follies of the past.

Earlier this month, a few days before the centenary of the Armistice, I visited the Great War Exhibition in Wellington. The exhibition is impressive and at times deeply moving. The Gallipoli campaign is made vivid by walls of colourised photographs, a huge diorama of the battle of Chunuk Bair, and the unnerving re-creation of the Quinn's Post trench. In the Great Hall, the visitor walks year by year through the war on the Western Front, from the delusory peace of a Belgian village in 1914 through the horrors of the Somme, Verdun, and Passchendaele, to the cessation of hostilities in November 1918.

At the end of the Great Hall, a wounded soldier lies in agony, clutching his shattered arm. Opposite there sits an elderly man, a boy who is presumably his grandson standing beside him, in what appears at first sight to be a garden, but on closer inspection turns out to be a small cemetery, with the graves of unidentified New Zealand soldiers surrounded by red poppies.

It took me a moment to realise the elderly man is the once wounded soldier, his arm amputated long ago, wearing campaign medals on his chest. His young grandson would himself now be in middle age. The aged veterans I faintly recall from Remembrance Day parades as a child are all gone now, along with their comrades who fell in the mud of Flanders and the hell of Gallipoli. Soon there will be no-one left who remembers them, and the memory of the Great War will fade, along with the Anglo-Boer wars, Crimea, and Waterloo.

I have always keenly felt the poignancy of the passing of time, of the way memories once vivid ineluctably slip away and disappear.

There are, however, weightier reasons than nostalgia for continuing to remember the Great War. For many of us our own stories have been shaped by the events of that war, especially if our now distant relatives were among those who fought and died, and it is important we remember them.

It is still more important to remember and understand why this war was fought and why it failed to bring peace. Moreover, in an era when nationalist ideologies are again on the rise and too many of those in power have little meaningful grasp of history, it is imperative we find a way to learn from the costly follies of the past.

In recent months, I have twice visited the cemeteries and memorials of the Western Front, first with my father to pay our respects at the graves of soldiers from our family who never came home and now lie in cemeteries in Roclincourt and Hebuterne, and later with a friend from Germany.

As a Christian, and as a priest, I came away with profoundly conflicting emotions. The scattered remnants of religion can be found everywhere along the Western Front, crossing the no-man's land between the opposing armies, from the consoling verses from Scripture on many of the headstones in the Commonwealth War Graves Commission cemeteries to the pieta in the gatehouse of the Deutsche Soldatenfriedhof (German military cemetery) in Romagne-sous-Montfaucon, the Virgin Mary cradling the tortured and crucified body of her son. Those scattered remnants are, however, contradictory and disturbing. 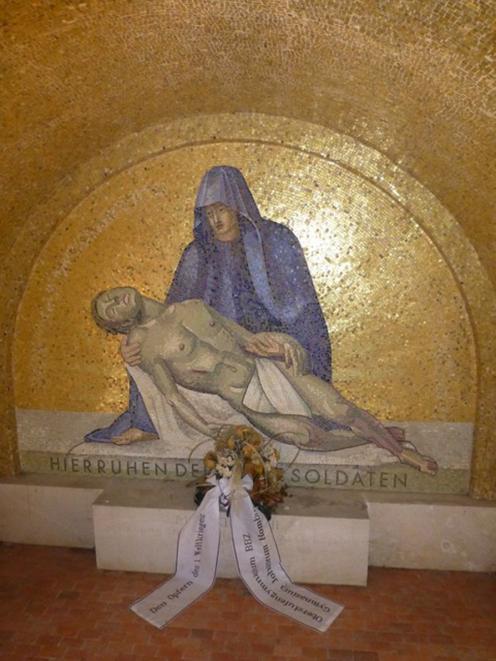 The pieta in the gatehouse of the German military cemetery in Romagne-sous-Mountaucon, France, where the Virgin Mary cradles the tortured and crucified body of her son. PHOTO: JAMES HARDING
For one thing, the Great War exposed the emptiness at the heart of the doubtless sincerely held belief God must be on our side as we take up arms for battle. It also exposed the blasphemous folly of invoking God to support toxic ideologies of nationhood.

Yet it would be disingenuous to make such claims, with all the benefit of hindsight, without also recognising that much of Christian history, from the Crusades to Crimea and beyond, is scarred and sullied by the association between Christian faith and the sacrilegious violence of war, and that, furthermore, the seeds of this miserable history were sown in the scriptures themselves. I dare, nonetheless, to believe on the basis of those very scriptures that the will of God for the world is for peace (Isaiah 2:4).

Talk of peace, however, can be cheap. In the medieval cloisters of the Cathedrale Notre-Dame de Verdun, there are sculptures of biblical figures, among whom are Cain and Abel. In the Old Testament, the murder of Abel, an ancient type of the crucified Christ, begins a woeful story of violence born of envy that only concludes with the paradoxically violent peace of the Book of Revelation. The story of that murder (Genesis 4:1-16) speaks of the human propensity for violence in a fallen world.

Part of the tragedy of our fallenness is that while war is unquestionably evil, sometimes it is necessary, and must regrettably be deemed to be just. The deeper tragedy is that the vast majority of wars are not. It is because of this terrible contradiction that we cannot afford the moral cost of forgetting.

•The Rev Dr James E. Harding is senior lecturer in Old Testament studies at the University of Otago and a priest in the Anglican Diocese of Dunedin.

Maybe Genesis is a story of Man's Fall from Grace. It does not explain War, and is a biblical apology for it.

The causes of War are animalistic impulse filtered through human reasoning. Territorial imperative and aggression, as described in the 1960's by author Konrad Lorenz.

It is accepted that servicemen did not fall to this level unless involved in war crimes.

philipbeck, you always do well on these opinion column sites.

Spirituality in war is the province of the Army chaplain, padre, or priest. It is not that battle is spiritual, but that a personal calm may be found before, between or after, by way of Eucharist mass, or lone contemplation. My interest is in the phenomenology of religion, not pastoral practice. I make no comment about the hypocrisy of Church, and Christian, involvement with war.