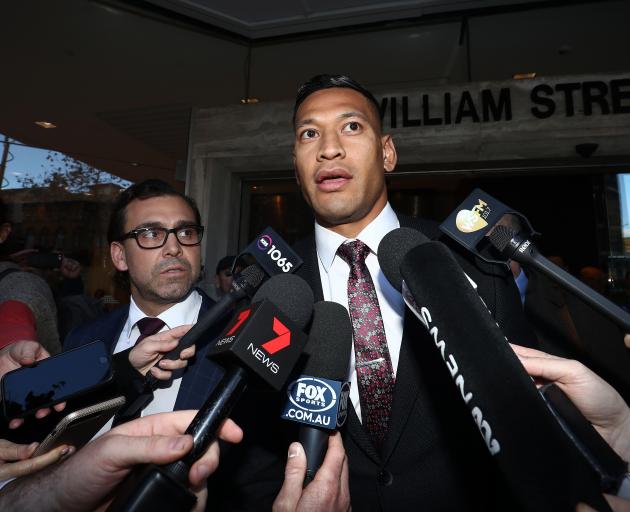 Few contemporary fornicators or thieves and fewer atheists will be deterred by a promise of hell's fire. PHOTO: GETTY IMAGES
Outrage and a rush to judgement dominate the space opened by Israel Folau's tweet about homosexuals and hell. Ian Harris asks: What does that tell us about ourselves?

With court action pending, the stir created by Australian rugby star Israel Folau still has a long way to run. I'm intrigued by what his tweet about hell and repentance tells us about ourselves and our times.

Did he have any right to post his tweet promising a future in hell for drunks, liars, thieves, adulterers, fornicators, atheists and, oh yes, homosexuals? Yes, from the standpoint of freedom of speech and centuries of evangelistic preaching along those lines.

But was he right to post that exhortation to repentance so publicly? No, since he had a contract with the Australian Rugby Union to avoid any action that would bring Australian rugby into disrepute. So did he know that proclaiming his understanding of scripture in this way would have that result?

He should have, but coming from where he does, probably not.

Folau was born in Australia and brought up a Mormon by his Tongan parents. In 2013, he switched with his family to the pentecostal Truth of Jesus Christ Church in Kenthurst, northwest Sydney, where his father is pastor to a small congregation. It is fundamentalist to the point where anyone baptised into the mainstream churches is also believed to be destined for hell, along with all those drunks, liars, homosexuals, etc.

The classic way to commend righteousness is to dwell on its opposites, and then offer people a way to overcome them through calling on Jesus to turn their lives around. Evangelicals see that not only as an act of love, but an obligation. Sharing the Bible, Folau says, is one of his duties as a Christian.

I have problems with that. The best way of sharing the Bible is to share love, not its condemnations - and it certainly has some. The apostle Paul sets out a raft of them in three of his New Testament letters, two of which cite homosexuals (and none mention hell).

In past ages, the fear of an afterlife in hell was a potent spur to amendment of life. That belief dovetailed neatly with the prescientific picture of a three-decker universe comprising heaven above, hell below, and Earth poised in between. Theologies were shaped accordingly, and the souls of the departed went up or down according to the way they had lived.

Now we know the universe is not like that. A physical hell has faded out of any theology rethought for the modern world, and out of the consciousness of most people in the secular West. It has become a metaphor.

Unfortunately, Folau's theology has not caught up. A physical hell still lurks in the imaginations of those whose world view is stranded in the cosmology of 3000 years ago and in creeds reflecting that. But few contemporary fornicators or thieves and fewer atheists will be deterred by Folau's promise of hell's fire.

Then there's the modern realisation that homosexuality is not a moral perversion but the result of a biochemical brain mutation occurring in the womb, and affecting about 10% of people across all races, cultures and the higher mammals. Contrary to what used to be thought, homosexuality does not automatically equal depravity, but sits within the normal human spectrum. That doesn't mean that homosexuals can't act in depraved ways - of course they can, just like heterosexuals. But it comprehensively skewers the attitude Folau displayed in his tweets.

Given all that, it's a pity the overwhelming response to those tweets has been anger, abuse and calls for suppression rather than reasoned argument. The notion that nothing must be said that might hurt homosexuals' feelings is paramount. Few stand back and defend the right to be wrong. More should, because no-one is perfect.

And freedom of expression does matter. That means freedom to express, not be cowed into silence by those who think otherwise. Folau is right to defend this freedom.

Taste, respect and responsibility also matter, however, and here Folau is wrong. He is bound by the professional players' code of conduct and the contract he signed to uphold "values of Australian Rugby that underpin the game", extended in 2014 to eliminate homophobia.

But is this censorship by contract? That's just another wrinkle in a dispute that presses hot buttons of human rights, religion, employment, freedom of expression, sport, celebrity stardom, sponsorship, political correctness and law.

So outrage is everywhere. Sadly missing, as Guardian journalist Peter Lewis observes, "is a public square equipped to deal with the complexity of an issue that presents in many shades of grey".

How mature, really, are we?

Ian Harris is a journalist and commentator.

"promising a future in hell for drunks, liars, thieves, adulterers, fornicators, atheists and, oh yes, homosexuals?"
How come it's just the supporters of homosexuals that are taking offence and want to make an issue of his words?
As someone that drunk too much in my youth, defiantly told a lie or two, enjoys fornication and is not a believer, I too could take offence but choose not to.
Folau can say what he wants. It make no difference to me. He is entitled to his point of view and I'm entitled to mine.
I'm just hoping he is wrong.

The danger of sin is death(spiritually and physically). A person knows that they have sinned when the psyche suddenly is changed for the worse and it continues like an unreversible condition.