Where to now illusion of security shattered? 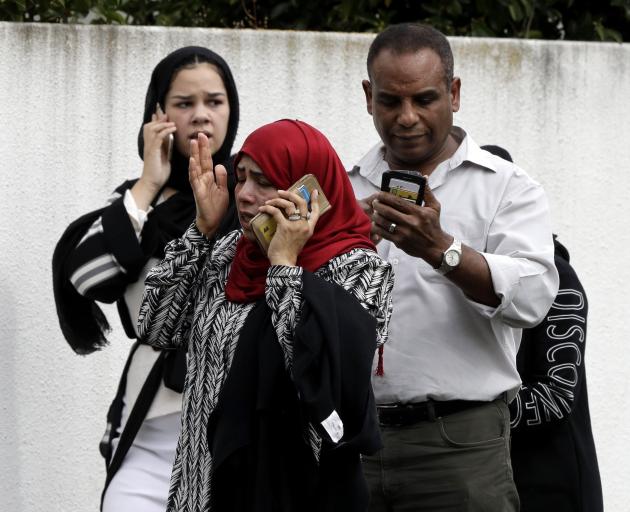 Christchurch residents react in horror to news of Friday's shootings. Photo: AP
Joe Burton outlines four lessons we must take away from the Christchurch terror attack

In the aftermath of the tragic loss of life in Christchurch on Friday, the focus needs to be on supporting those who have lost their loved ones and on fostering a sense of national unity in the face of a heinous act of terrorism.

At this early stage we know the perpetrator of the most devastating terrorist attack in New Zealand's history was a white supremacist. We know he accessed and stockpiled firearms over a long period of time, and that his racist beliefs motivated his actions.

But there are other lessons and important points to make about the attack. These should shape the longer-term response by the New Zealand Government.

Muslims the biggest victims of terror across the globe

The first is a more sustained governmental and societal focus on right-wing extremism. It may turn out that the extremist who committed this attack acted alone, but the ideology that motivated him has spread around the globe and is infecting our politics and discourse.

We know right-wing radicals have committed atrocities before. The most notable perhaps was an extremist who killed 77 people in Norway in 2011. But this is part of a long history of extremist violence on the right.

According to research by the Anti-Defamation League, over the last decade, 73.3% of all extremist-related fatalities in the US could be linked to domestic right-wing extremists, while 23.4% were attributable to Islamist extremists. We should pay attention to these statistics in New Zealand. The fear that jihadist terrorism will occur sometime in New Zealand is real, but we haven't adequately recognised the threat from neo-fascist ideology.

It is a tragic footnote to this story that globally Muslims have been by far the most victimised group by terrorism in the post-9/11 era.

Clearly, we need to do more to protect Muslim communities from acts of violence and to focus more tightly on the ideology of fascism, which underpins both right-wing groups and those who commit violence in the name of Islam.

A second lesson relates to the process of radicalisation. We need to better understand why people who commit mass murder fall into a set of hateful beliefs. This is clearly a serious social problem caused by many variables, including demographic change, inequality, poverty and lack of education.

The latest research on radicalisation suggests many of those responsible for ''lone wolf'' acts are socially illiterate and have fallen out of the mainstream of society. They often indicate these beliefs via social media, suggesting we could do more to report these viewpoints to authorities.

Radicals also tend to share a set of psychological or cognitive traits that underpin their actions. According to recent reports by the European Institute for Peace these include grievances that are galvanised by a unifying ideology; a process of cognitive ''de-pluralisation'', in which they tend to focus on a very limited set of ideas to interpret the world; and confirmation bias, where events are repackaged into existing beliefs and assumptions.

Other research shows radicals climb a ''staircase'' to violent acts involving a series of incremental steps over a period of years. This suggests earlier intervention will be the key to having people back away from violence.

The dark web is a breeding ground for hatred

A third lesson is that global communications technology is providing a breeding ground for extremism and hatred. In this sense ''lone wolves'' aren't acting alone. They are connected to a structured and well-financed global neo-Nazi ideology that uses the internet to propagate its beliefs.

According to a recent report by the Data and Society Research Institute, far-right actors are regularly spreading white supremacist thought, Islamophobia and misogyny on the internet through sites such as 4chan and 8chan.

Right-wing groups have regularly circulated propaganda within social media channels and have sown racial and ethnically charged divisions within society through memes and disinformation. This was a tactic of the far right in the US elections in 2016, and has been used regularly since, including in the Brexit debates.

These websites aren't easy to take down. As recent efforts by Google show, neo-Nazi sites that are blocked or banned ''go dark'' behind encrypted platforms that are out of reach of tech companies and security services.

Timothy Snyder, a renowned Holocaust historian, notes this form of ''mass manipulation'' is based on appealing to emotions rather than reason. The spread of fake news and propaganda on the internet creates a perfect platform to increase fear, anger and anxiety. These are the psychological conditions from which acts of violence are committed.

New Zealand does have a right-wing problem

The final lesson is a wider, political one for New Zealand. There has undoubtedly been a tendency in some quarters of New Zealand politics to assume we are living in a largely benign international environment. This is part of a troubling isolationist tendency in New Zealand politics that contributes to us not taking security seriously and investing in it accordingly. The Christchurch attacks have shattered these illusions.

The right-wing problem in New Zealand has historical roots. White pride marches have taken place in Christchurch on numerous occasions. A far-right candidate who was convicted of firebombing a marae stood for mayor in recent years, most recently in 2013 when he received a small but significant number of votes.

On the international stage we need to stand up against the beliefs that underpin right-wing extremism. Jacinda Ardern's call to Donald Trump to be compassionate to Muslims was a good start and reminds us racism at the top of society can create a permissive environment for extremism.

We also need to reorient our foreign and security policy towards de-radicalisation processes both domestically and internationally. The UK's Prevent programme, which has seen a big increase in efforts to prevent right-wing extremism, may be a good model to follow.

New Zealanders now know the fear and chaos that follows terrorism. But the goal of terrorism is to use that fear to undermine our democracy and way of life. So we need to channel our response in a way that protects our values.

We must be aware of the perils of overreacting, but nevertheless need to redouble our efforts to create multi-level, evidence-led strategies to target radicalism, recognising global and local drivers of extremism.

-Joe Burton is a senior lecturer at the New Zealand Institute for Security and Crime Science at the University of Waikato.

Only a conspiracy theorist would observe that the showing of the National Front in Christchurch elections was cheering to pockets of well off leafy suburbs.