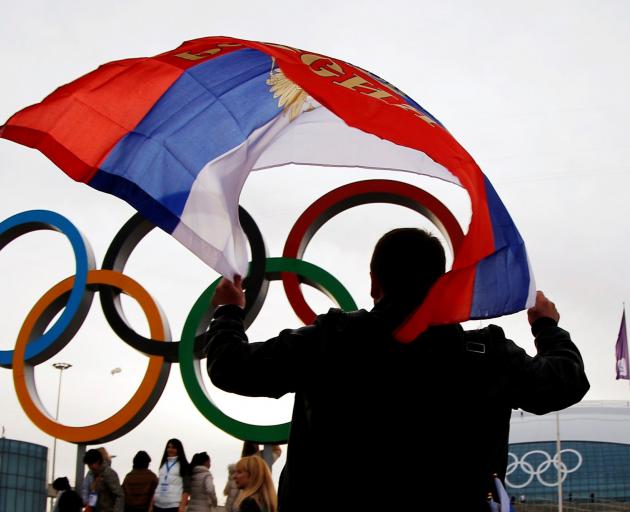 Russian athletes are likely to be allowed to compete at the Tokyo Olympics next year — if they can prove they are not linked to their country’s doping programme. PHOTO: REUTERS
Caveats and compromises in the small print mean there is a good chance Russian athletes and footballers will appear at the 2020 Olympics and the 2022 World Cup, writes Sean Ingle.

It makes for an alluring headline: Russia finally banned from international sport for four years by the World Anti-Doping Agency, including the 2020 Olympics and 2022 World Cup, after an institutionalised conspiracy so breathtaking it would surely make even John le Carre’s jaw drop.

Yet in the small print of Wada’s decision in Lausanne there are caveats and compromises, along with brightly lit pathways for Russian athletes to continue competing on the global stage.

What is printed in big clear letters at this moment might look altogether more squished and blurred in the months ahead. This is a delicate truth. It might yet change.

After all, Russia will still be able to host Euro 2020 matches, and play in the competition, because Wada’s ruling applies only to global events, not continental ones. And while there will be no raising of the Russian tricolour, or full-blooded cries of "Rossiya svyashchennaya nasha derzhava!" at the Tokyo Olympics next year, hundreds of Russian athletes are likely to be given the all-clear to participate if they can prove they are not linked to their country’s doping programme.

Informed sources in the Olympic movement and Wada have already suggested that a similar solution to the one imposed for the Pyeongchang Winter Games in 2018 is on the cards, with Wada — and then the court of arbitration for sport — being the ultimate arbiters of who can compete in Tokyo. Remember that Russia was officially banned from Pyeongchang. And yet what happened next — 168 athletes clad in Russian red marched into the Olympic Stadium, acknowledged the crowd’s applause at the opening ceremony and heard the announcer cry: "Ladies and gentlemen, the Olympic Athletes from Russia!"

Meanwhile, Fifa says it will "clarify the extent of the decision" with Wada before saying anything about Russia’s potential participation at the 2022 World Cup. But given the supreme reluctance of football’s governing body to criticise Russia before it hosted the 2018 tournament — even after the Canadian law professor Richard McLaren found overwhelming evidence that more than 1000 athletes in 30 sports had been involved in a state-sponsored doping programme — don’t hold your breath.

Tellingly, Russia’s sports minister, Pavel Kolobkov, has already indicated that his country will appeal against the decision of Wada’s executive committee, saying he believes their "prospects are quite good".

Who knows what Cas will decide? But we can say this for certain: its legal judgements often wrong-foot perceived wisdom.

Before the 2018 Winter Games it overturned the lifetime Olympic bans of 28 Russian athletes prompting widespread angst and outrage — with even usually stoic figures in anti-doping worried about the consequences for elite sport.

No retreat, no surrender: that has been the Russian way from the start. Pretty much everyone now accepts the country was engaged in extraordinary levels of deception and manipulation when it came to doping — except, of course, the Russians themselves.

It started in 2011 and led to hundreds of Russian athletes being given a cocktail of banned substances including methenolone, trenbolone and oxandrolone. The substances were mixed with alcohol (Chivas whisky for male athletes and Martini vermouth for women) to improve the absorption of the steroids and shorten the detection window, and then spat out. Grigor Rodchenkov, the former head of the Moscow anti-doping laboratory who later turned whistleblower, even had a name for his concoction: "The Duchess", after the popular Russian cocktail.

It was Rodchenkov who also revealed how Russia corrupted the 2014 Winter Games in Sochi — after the FSB, its security service, developed a method to open anti-doping bottles surreptitiously. After each day’s competition tainted samples from Russian athletes were passed through a mousehole into an adjacent room where they were opened and switched for clean urine in the dead of night.

This system allowed the Russians to continue to use steroids during the Games, handing them an even bigger advantage. And they would have got away with it, too, but for Rodchenkov, who fled the country in 2015 with hard drives containing thousands of pieces of evidence.

The latest twist in this sprawling drama came in January when Wada’s executive committee was finally able to extract a database from the Moscow anti-doping laboratory to help it prosecute individual Russian athletes. That database was recently found to have been manipulated to conceal failed drug tests, leading to the four-year ban.

Unsurprisingly Rodchenkov, who is now in a witness protection programme in the United States, feels vindicated. But he also wants Wada to go further.

"As usual Russia has disregarded all of its promises and obligations to clean sport," he said on Monday.

"The Moscow database from my laboratory was manipulated. Tons of files and results were deleted. After all of this, who can say whether there are any clean athletes in Russia if the crucial data is lost? The results of the London and Sochi Olympics should be reanalysed and reconsidered with the new knowledge available today. We need to take the strongest action to bring justice back to sport."

Travis Tygart, the chief executive of the US Anti-Doping Agency and a vocal critic of Russia, agrees with Rodchenkov, saying Wada had not gone nearly far enough.

"To allow Russia to escape a complete ban is yet another devastating blow," he warned.

"There is no disputing that Russia has committed the most intentional, deep and broad level of corruption on the entire sports world that has put money over morals, abuse over health and corruption over the Olympic values and all athlete’s dreams."

Yet the approach of the International Olympic Committee and Wada is to try to punish Russia the country, while preserving natural justice for athletes who have not failed any test or been implicated in any wrongdoing. As one influential onlooker put it: "There is quite rightly a big desire to see punishment. But it seems that it is not so easy to punish the guilty."

Meanwhile, of the few Russian athletes to speak out against doping the world high jump champion, Mariya Lasitskene, recently lamented the situation in her country, saying: "Clean athletes are still defenceless and not sure they’ll be able to compete tomorrow."

Despite the apparently emphatic nature of Monday’s verdict, the fate of Russia — and by extension Lasitskene and the country’s other athletes — remains in an uneasy limbo. — Guardian News