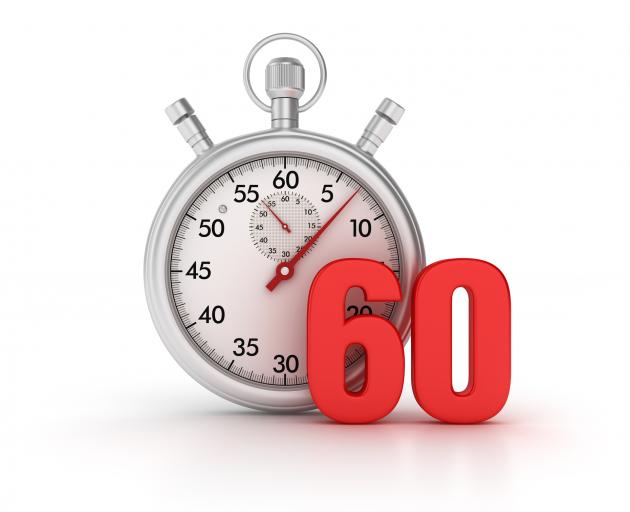 When I was 9, I saw my mother run across our yard in Lady Frere, brandishing a tennis racquet, off to a game. Wow! I thought. So you can still run when you're 35!

Not only run, but lead a useful, energetic life full of goodness right into your 80s, if you're my mother.

Recently, I had a significant birthday, and now I find myself Suddenly Sixty, to take as my own the title of a captivating volume of poetry by Judith Viorst. In fact it was a birthday of poems: I received scores of them and am still, four months later, reading them slowly, thinkingly, sitting on my front steps with a mug of tea, feeling loved and delighted. Here's a brief one for your delectation from Peter Sara, another contributor to this column:

No quiet mouse is our Jenny

Who, when she cannot sleep

(Ironing?! What does he take me for?)

But turning 60 isn't all about reading delicious lines of poetry; it's also about looking back and realising age does hand you a wee bit of wisdom. Here are some things I've learned.

First, that "each day is God's specific gift to me to be in".

There was a time in my life (when I was a young Mum, mired in nappies and toy-strewn carpets) when I was dissatisfied with my present. I mean, I loved home and hearth, and especially my offspring, but all that I had was never enough. I looked forward keenly to a future in which everything was right and the frustrated voice in me was stilled.

Slowly, it dawned on me that this was my one and precious life, and that it didn't need to be perfect to be wonderful. Slowly, I asked God to make me over, and slowly he did.

Contentment in, and with the present dropped into my heart. Part of me now regrets the wasted years with their restless wallowing, but the other part simply feels thankful for the deliverance and the happier place.

This has made me think about deliberately expanding my heart. Love does it, including love close to home. Intentional time spent on family and friends - on people, curious, irritating or engaging as they might be - isn't wasted. In particular I've realised in the last decade, with the demise of our parents, that my five siblings, one in heaven, two in the USA and two in the UK, are precious and irreplaceable. Given to me by God to love and never take for granted.

Our Dad, shortly before his death in 2008, asked me to pass the following on to my siblings. It would give him great joy, he said, if we went right on loving one another and being a family. I reckon he must be clapping heavenly hands right now.

Loving your siblings with commitment brings a sense of peace, stability and rightness to your life. It can take the sting out of bad childhood memories, because, as the First Epistle of Peter says, "love covers a multitude of sins".

The third thing I want to talk about is - unpopular concept sometimes - forgiveness. In my work I often come across folk who hold tenaciously to the past, as in hurts that run so deep that they've begun to define their lives as Wronged People. This inhibits change and growth and ... well, the upspringing of joy. As Anne Lamott says in Traveling Mercies: "Not forgiving is like drinking rat poison and then waiting for the rat to die."

But how to embark on the Herculean task of leaving the past behind and forgiving? Gretchen Rubin puts forward this sensible idea in The Happiness Project: "Act the way you want to feel." In other words, make a mental decision to be a person of grace and kindness and act repeatedly as if the inner change has already happened.

I've found this works, particularly if combined with a constant, earnest prayer: "Lord, change my heart." To release the past (if not to forget it) and to be able to embrace today, untrammelled by past anger and grievance. Anne Lamott says that forgiveness is "giving up all hope of having had a better past". It's not about demanding or expecting an apology (because some people will never give one). Forgiveness is for oneself; it's not conditional on repentance by or change in the other. It's about extending mercy even where one has known only offence and injury.

Of course it's not an instant fix - it's a process, sometimes agonisingly slow! - but I believe that God honours a solid commitment to let go of resentment, to "pack it in a box and float it down the river" as a friend said to me memorably once when my fingers wouldn't unclench and my heart was hot and angry.

I'm reminded here of the Biblical injunction: "Be kind to one another, tender hearted, forgiving one another, just as in Christ God forgave you."

Here's Anne Lamott again. She sees forgiveness as synonymous with kindness and grace. Thus, from Hallelujah Anyway: "Kindness towards others and radical kindness to ourselves buy us a shot at a warm and generous heart, which is the greatest prize of all."

Who can resist embarking upon forgiveness when it's put like this?

When I re-read what I've written, I can't help thinking that great age brings its compensations!

I once told my friend, Clair, that each of my decades has been happier than the last.

She said, "Well, when you're really old you'll be bouncing off the walls of the rest-home!" There might be worse things to do, or be.

I attribute this lightness of spirit I've come increasingly to know to the realisation that this is a beautiful world and that each day God carries me in his arms.

Jenny Beck is a keen member of the Dunedin City Baptist community.