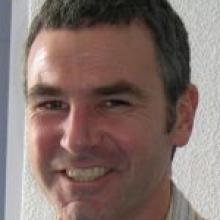 Dr Paul Keys
A Waimate man is "peeved off" with the medical system, saying doctors are not proactive enough in contacting men and getting them to go for a prostate cancer check.

However, speaking as the general practice liaison for South Canterbury, Aoraki Primary Health Organisation practitioner Paul Keys said this was because the effectiveness of prostate cancer checks was "somewhat controversial".

In response to an article in The Courier a fortnight ago, a Waimate man - who asked not to be named - expressed a concern that men were not being contacted by their GPs when they were due for a prostate cancer check.

"All medical centres should flag men for a prostate check at certain ages. The medical profession is not up to speed with this thing," he said.

He also believed doctors should do a PSA [prostate-specific antigen] blood test and a physical examination - where the prostate is examined rectally - when checking men for prostate cancer.

"It should be a full test, regardless."

Dr Keys said the reason there was no standard procedure for contacting men for a check was because the National Health Committee advised asymptomatic men not to be screened.

Screening included the PSA blood test and the physical examination, which were designed for men without symptoms of prostate cancer, to identify if they were at risk.

"There is a lack of proven benefit from screening, and the potential for harm to arise from treatment."

Mrs Johnson said PSA blood tests had a low specificity rate, and many men required further testing afterwards, which could reveal no cancer.

The accuracy of a physical examination depended on the experience of the clinician, and many tumours of the prostate could be missed this way, she added.

"It should be an informed choice for men with a father or brother who has developed cancer to have a prostate cancer screening, with them knowing the potential risks and lack of proven benefit."

CSNZ advised asymptomatic men discuss the benefits and risks of screening with their GP, until there was evidence early detection and treatment of prostate cancer would result in increased life expectancy or an improved quality of life.

CSNZ is doing tests to examine the effectiveness of prostate cancer screening, with the results expected to be available in five years.

Dr Keys said if a man wished to have a screening, in most cases his GP would agree to do one after discussing the test with him.

She said she would perform the tests if her patients asked for them, although did not rush into doing physical examinations.

"It's a very intimate and personal examination that I don't jump to.

"The test is not foolproof."