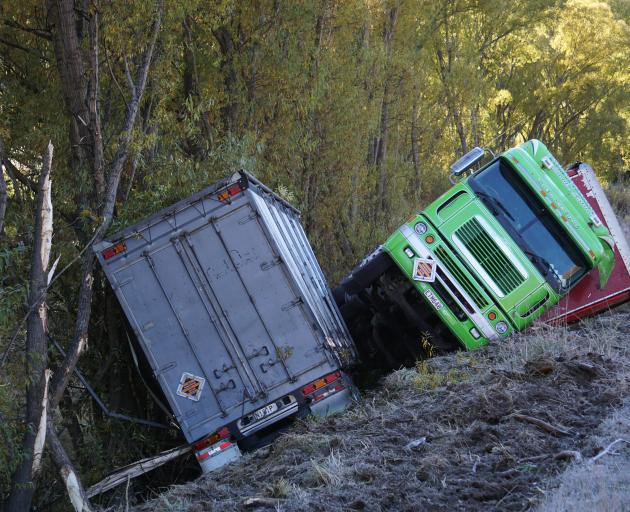 The remains of the Summerland freight truck at the bottom of Cluden Hill, in the Lindis Pass, in April last year. PHOTO: SEAN NUGENT
A truck driver has escaped conviction for refusing to give blood following a crash on the Lindis Pass-Tarras Rd last year.

Steven John Cleeve (50), driver, of Christchurch, appeared before Judge Michael Turner in the Alexandra District Court yesterday, on a charge of refusing to give a blood specimen.

Cleeve was driving a Summerland truck and trailer unit, which jack-knifed on to its side on Cluden Hill on the Lindis Pass (State Highway 8) on April 17.

The crash, which happened about 5am, left Cleeve with back, neck, head and arm injuries.

He told police he had drunk about three beers the previous night, having his last one about 6pm.

Former Constable Toni Velenski said she requested nursing staff at Dunstan Hospital take a blood sample from Cleeve, and advised him it was an offence to refuse.

However, nurse Viki MacPherson said, during cross-examination, Const Velenski had asked Cleeve for the blood test and when he declined Ms MacPherson asked if she could do the test. Police evidence stated he declined the request, but was willing to give a breath test instead.

Constable Warwick Cheney, of Cromwell, visited Cleeve in hospital later that day to get a statement.

Const Cheney said Cleeve told him he "refused blood because he saw someone get off a careless/EBA charge after requesting breath [testing] and refusing blood".

Judge Turner said "ambiguous evidence" and wording around how the request for blood was put to Cleeve "suggested he was given the option".

The charge was dismissed.

Judge Turner told Cleeve his comment about getting off a charge by refusing blood was "no defence".