Proponents of the Roxburgh Gorge cycle trail are expecting to receive a $2 million funding boost from the Government, which yesterday gave the 34km venture the official thumbs up.

The trail, which will be built on the State Highway 8 side of Lake Roxburgh, between Alexandra and Roxburgh, was one of five tracks given a total of $13.9 million yesterday under Nga Haerenga, the New Zealand Cycle Trail project. 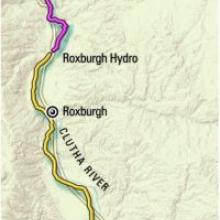 How much was granted for the Roxburgh trail was not available to the Central Otago District Council, the driving force behind the trail, last night. Council business development manager Jonathan Gadd said the council had asked the Government to pay $2 million of the track's $3.3 million construction cost.

"We haven't received that letter yet so we can't say for sure what we're going to get or what conditions might be attached. But that [$2 million] should be what we get. That's always been the agreement," Mr Gadd said.

The Government's earlier financial support for only part of the Clutha Gold trail, between Lake Roxburgh and Beaumont, was not relevant to the Roxburgh Gorge trail, Mr Gadd said.

Funding for a second section of the Clutha Gold trail, from Beaumont to Lawrence, is under review.

"With Roxburgh Gorge, it's either go or no go. You can't only do part of it."

Where the other $1.3 million of the Roxburgh Gorge trail's construction cost would come from had not been finalised, Mr Gadd said.

"We're looking at a number of funding options ... can't presuppose what they are at this stage."

However, before the Government approved its contribution to a cycle trail, it required information on possible avenues of additional funding be provided to it, Mr Gadd said.

"And having government funding gives a degree of comfort when it comes to finding the rest of the money."

CODC community development manager Mathew Begg said a resource consent hearing concerning structures such as bridges, toilets and signs for the Roxburgh Gorge trail is scheduled to be held in Alexandra on October 13.

The application for resource consent, which would be heard by independent commissioners, did not apply to the actual trail, which is a permitted activity under the council's district plan, Mr Begg said.

The trail goes through 11 private properties and Department of Conservation, Land Information New Zealand and Contact property, so easements had to be gained. Negotiations with those landowners were ongoing, Mr Begg said, so it was not possible to predict when construction of the track might start.

Although the council had been backing the project until now, a trust was recently established to take over governance of it. Roxburgh Gorge Charitable Trust members so far are Stephen Jeffrey, who is chairman, Clair Higginson, Barrie Wills and Malcolm Macpherson. Additional trustees would be required, Mr Begg said.