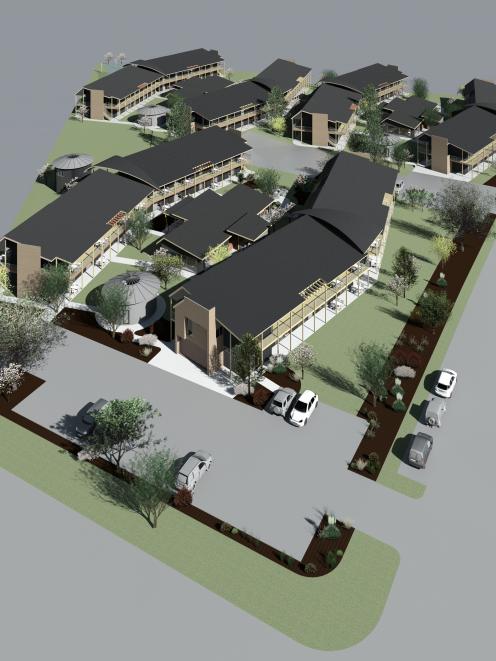 The proposed workers' accommodation development for Cromwell. Image from Tony Butel Design.
Should a proposed 700-bed seasonal workers accommodation complex at Cromwell attract a development contribution of $1.1 million, or less than half that amount?

That question will be discussed by the Central Otago District Council at its meeting in Alexandra today.

The proposed multi-lot accommodation development was announced in March by the council, with Mayor Tony Lepper praising the ''vision and commitment'' of the developers.

The plan would alleviate the critical shortage of seasonal worker accommodation and affordable rental accommodation in the district, he said at the time. Occupants of the rooms would have communal dining, ablution and laundry facilities.

The council agreed to sell 7ha of industrial-zoned council land in Cemetery Rd to developers, subject to resource consents being gained.

In a report to today's meeting, infrastructure services executive manager Julie Muir said land use consent had been granted for the construction of accommodation for 738 workers and a manager's residence.

A standard assessment of the development contribution to be paid to the council was $1,127,276, she said.

However, it was a unique development that did not fit into one of the land use categories in the council's development contribution policy. A further assessment using a different method came up with a figure of $521,579.

Ms Muir said the development and financial contributions policy was applied to subdivisions and developments which increased demand on council services. They were required for water, wastewater, roading and reserves.

The council could individually assess any development it decided created a significantly different demand on infrastructure than could usually be expected under that category.

While the higher figure provided more revenue for council, it might be viewed as an inequitable level of contribution compared to the impact of the project on infrastructure. It also might impact on the viability of the project, she said.

The lower figure was fairer and demonstrated a ''pragmatic approach'' to allocating growth costs on infrastructure for unusual developments, Ms Muir said. She recommended the council impose the lower figure.

''This development is considered unique due to its scale. It provides a dormitory setting, with less facilities per person than typical commercial accommodation.''

A Central Otago labour market survey last year found an acute shortage of suitable accommodation for seasonal workers during harvest would impede the growth of the horticulture and viticulture industries. An extra 600 beds were needed by 2018-19 to cater for predicted growth in those industries.