Another scare, but Stu walking tall 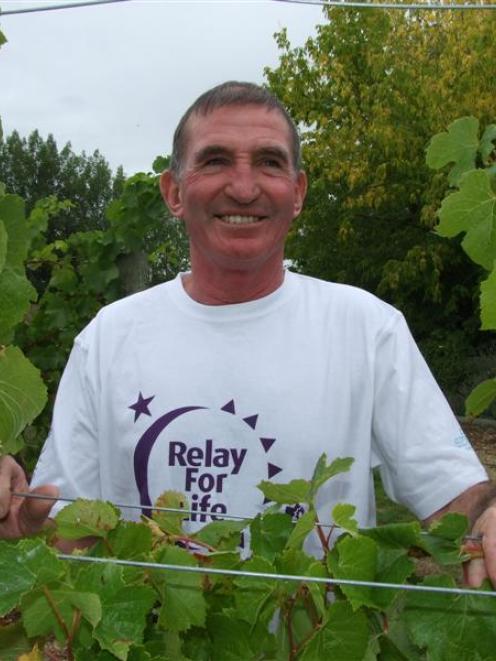 Stu Beattie says he is one of the "newest" cancer survivors and will be celebrating in this weekend's inaugural Central Otago Relay for Life. Photo by Lynda Van Kempen.
Stu Beattie has survived a heart attack, a stroke and a digger accident that nearly claimed his leg.

He thought that was his "tour of duty" over, but now he is battling cancer and says he will be the "newest" survivor starting the Central Otago Relay for Life at the Cromwell racecourse at noon today.

The Alexandra man has just completed a six-week course of chemotherapy and radiotherapy to treat a golf ball-sized tumour on his neck and another on his tongue. He feels good and is positive he has beaten cancer.

Although he is supposed to be taking life quietly as he recovers from his treatment, he has an important task to carry out today.

"I've been around all my business competitors and they've pledged $1000 if I walk a mile or two in the Relay for Life," Mr Beattie said.

The 61-year-old owned construction firm Benchmark Construction, but had recently retired. The support from "opposition" firms was all the more heart-warming because usually they competed.

Mr Beattie was always determined to take part in the Cancer Society fundraiser in some way but was unsure whether he would be well enough.

He discovered the lump on his neck at Christmas while shaving - "and all hell broke loose". In the past 15 months, he had survived a stroke and then a heart attack, and 11 years ago he got "in the road" of a 20-tonne digger and his right leg was crushed.

Mr Beattie says he is not one to wallow in self-pity.

"If you think you're hard done by, just look around - there's always someone 10 times worse. I guess I'm a glass-half-full kind of person."

Asked if he felt like a success story, Mr Beattie said "Hell yes".

"And [today] when I walk in the opening lap, I'll have been a survivor for five days [since his cancer treatment finished] and I'll be there to support all the teams."

Being back on Central Otago soil helped the healing process.

"As soon as I set foot back on Central Otago soil I feel like I'm only 55. It certainly makes you glad to be alive."