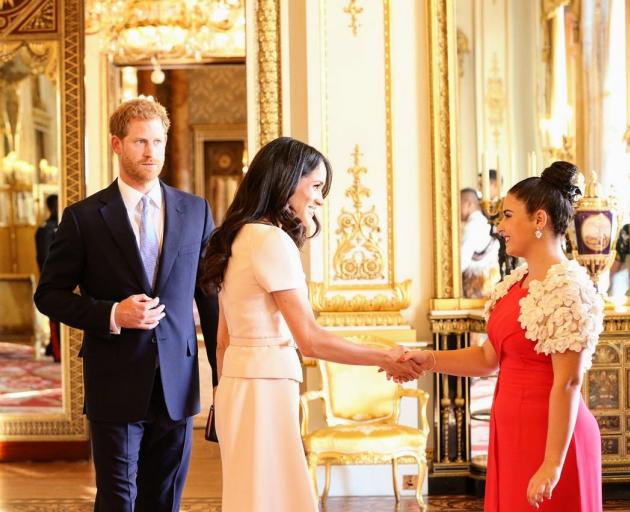 GirlBoss founder Alexia Hilbertidou, of Auckland, meets the Duke and Duchess of Sussex in 2018 while in London receiving a Queen's Young Leaders Award. PHOTO: SUPPLIED
Alexia Hilbertidou’s mission is to inspire young girls to follow their dreams and enter traditionally male-dominated industries. Before speaking at next month’s Central Otago Health and Safety Forum, Miss Hilbertidou  spoke to Tracey Roxburgh about GirlBoss New Zealand and her hopes for what it can achieve.

When Alexia Hilbertidou was 16, she looked around her IT class and realised she was the only girl there.

A year later, she became the only girl in her advanced physics class and started questioning why other young women were not represented in fast-growing fields.

"I felt quite isolated in that experience, and spurred on by that isolation, I started GirlBoss New Zealand, to create a community for other young women who are passionate about science, technology, engineering, maths, leadership and entrepreneurship."

Four years on, Miss Hilbertidou is the chief executive of her own company, has grown her network to more than 13,500 young women aged between 13 and 18, and has big plans.

"In New Zealand, there are more CEOs named John than there are CEOs that are women.

"If we look at the NZX 50, there’s only one female CEO at the moment. 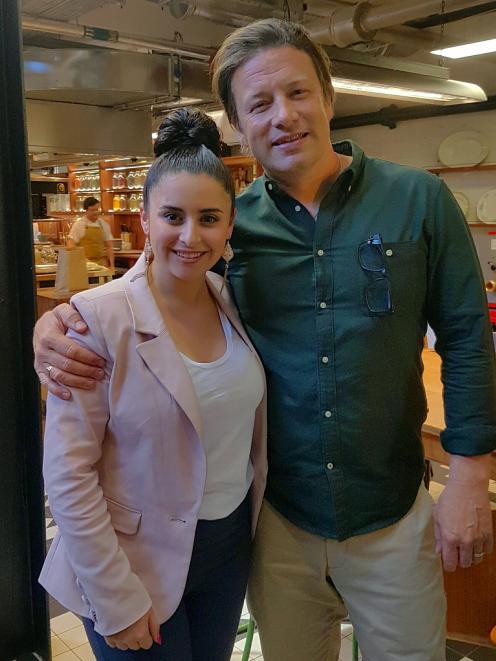 GirlBoss New Zealand founder Alexia Hilbertidou with celebrity chef and activist Jamie Oliver in London. PHOTO: SUPPLIED
"What I’m really passionate about is this generation going forth and changing those statistics — I really do believe, with strong effort, this can be the generation to reach full gender equality in New Zealand."

She was passionate about ensuring equity of access — for young women, regardless of their socioeconomic background or race — to programmes such as those her company was providing.

"I’m part Samoan as well, [so] to see more Pasifika young women and Maori young women step up, take advantage of opportunities and to be equipped with the confidence, and for us to highlight role models that all young women can relate to [is important]."

The focus was on fast-growing and largely male-dominated industries, and creating pathways to help young women interested in careers in them to have the confidence to do so, she said.

In January, she completed her first "GirlBoss Advantage" programme, a sponsored, five-day summer internship at Fletcher Building where the 28 participants got experience in building, construction and civil engineering.

There are plans to run the programme in a different industry in the South Island.

"I feel really lucky that at age 20 that I really am fulfilling a lifelong dream of mine, which is to work in the women empowerment space, to work with youth, to encourage young women to reach their full potential, to change some of our diversity stats in New Zealand which is something from a very young age I was very aware of and feel really passionate about solving."

She has also been recognised nationally and internationally. She has won 30 awards to date, including the 2019 Prime Minister’s Pacific Youth Award, the most influential woman under the age of 25 at the Westpac Women of Influence Awards and, in 2018, a Queen’s Young Leadesr Award for Services to the Commonwealth.

While in London she met and was mentored by celebrity chef and activist Jamie Oliver.

"It was one of the most inspiring encounters I’ve ever had."

Oliver shared his story with her — deciding when he opened his first restaurant at the age of 21 to only employ people from disadvantaged backgrounds, including those who had drug and alcohol problems, were homeless, or had just been released from prison.

"Everyone around him thought he was absolutely nuts ... but Jamie’s decision to do something different and give a hand up to others propelled him and his restaurant to global fame.

Miss Hilbertidou said she now shared that message in her workshops, hoping to challenge today’s teenagers to be the ones with hope and vision.

"Realise that you’re never too young to create change — you don’t have to wait until you reach a certain milestone ... to go out there and create change.

"I think often young women’s perception of leadership is often waiting for someone else to tell them that they’re a leader ... I want to shift that mindset."

Miss Hilbertidou is a keynote speaker at the Central Otago Health and Safety Forum, being held in Queenstown March 3-5 at the Millennium.

"young girls to follow their dreams and enter traditionally male-dominated industries"
Alexias' sentiment sounds nice but what if their dreams have nothing to do with the postmodernist feminist agenda of tearing down the patriarchy.
I'd suggest learning from Jamie, NOT following him
Remember, Get woke Go Broke.

In January 2018, court papers revealed that Jamie's Italian had debts of £71.5m, including £2.2m in wages owed to staff; £30.2m of overdrafts and loans; £41.3m owed to landlords, HM Revenue and Customs, suppliers and other creditors; with £47m of the debts covered by loans from HSBC Bank and Oliver's other companies. The group went into administration on 21 May 2019 with 22 of 25 restaurants closed and 1,000 jobs lost.
Sad thing is, this sounds like our building industry already.