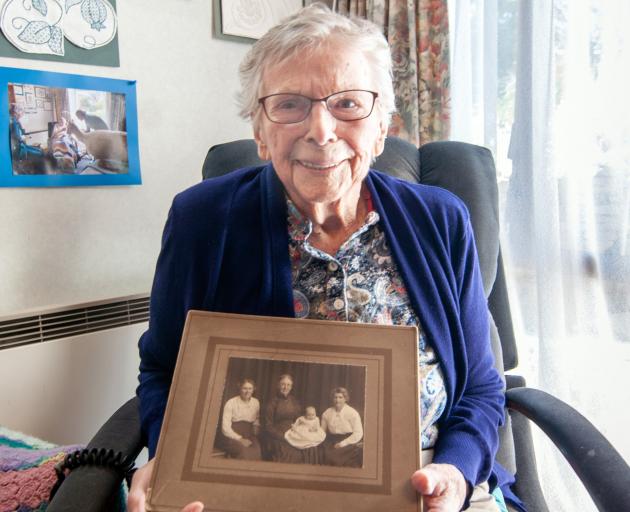 Dulcie Armitage, of Alexandra, holds a photo of herself as a baby with her mother, grandmother and great-grandmother. Mrs Armitage turns 100 today. PHOTO: SHANNON THOMSON
Dulcie Armitage has packed a lot of living into the past century.

The Alexandra woman is celebrating a milestone today — her 100th birthday.

The second-oldest of seven children, Mrs Armitage (nee Powell) is the last one still living.

But she is not the first in her family to make it to 100 — her mother also lived to see the triple digits.

Mrs Armitage’s sense of humour is still sharp, as is her recall of events from decades ago.

She cannot tell you the secret to her longevity, but the years have been full of family, her strong Christian faith and fun.

‘‘I’ve done a lot of things and there’s nothing I would change,’’ she said.

When war broke out, she served with the New Zealand Women’s Land Service from 1940-46, preferring to be working outside.

She was posted to Clyde Hospital to milk the cow and look after the garden.

That was ‘‘too boring’’ for her so she transferred to Charlie Weaver’s orchard at Earnscleugh.

Four land service girls worked there and on Fridays they would pack their lunches and ride their horses to the dam for the day.

Evenings were spent with send-offs and welcomes home for the soldiers, and many dances at the Earnscleugh Hall.

She met the love of her life, Henry Armitage, in Ranfurly, and friendship followed before they married in 1943.

The early years of marriage were spent in the North Island. Henry was an aircraft mechanic in the air force stationed at Te Rapa, near Hamilton, before moving to Gore where he taught engineering at Gore High School.

The couple moved to Ranfurly, where Mrs Armitage started Plunket, a gardening club and Women’s Institute.

She was also involved in Girl Guides and Rangers, as well as St John.

‘‘They are all fond memories,’’ she said.

Ranui Court Retirement Village, in Alexandra, has been her home for more than a decade.

She said the staff were great but having to rely on others when she had been capable for so long had been a challenge.

To celebrate her milestone, Mrs Armitage is having a special afternoon tea with her daughter and family at Ranui. Her two sons in Australia are unable to attend.