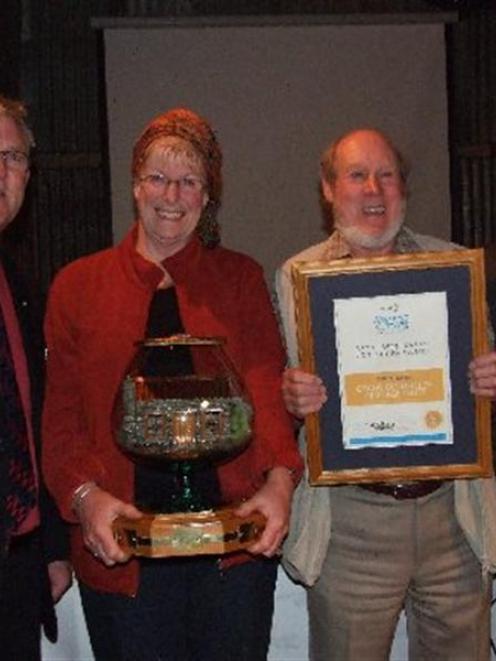 The Otago Goldfields Heritage Trust has been running the cavalcade since 1991, covering new trails each year with a different town in Otago and Southland as the destination each time.

"The Goldfields Cavalcade is now an iconic event that is well-known across the country," TrustPower community relations representative Melanie Gray said at the awards function in Alexandra last night.

"This group has successfully raised the profile of Central Otago while providing a springboard for many local groups to fundraise."

"There is a huge volunteer effort that makes this event possible, and the potential benefits to the host town are huge," Miss Gray said.

The trust worked to develop, represent and promote the historic goldfields trails in Otago.

The cavalcade included riding and wagon trails, as well as trails for walkers.

It attracted participants from all over New Zealand and from overseas.

The trust received $1500 prize money and will represent Central Otago at the national final of the community awards in Nelson in March.

It also won the heritage and environment section of the awards, with Clyde Historical Museums in second place.

That organisation provided emotional support, advocacy and information to all people affected by crime and trauma throughout Central Otago and the Upper Clutha region, Miss Gray said.

Alexandra and Clyde Meals on Wheels drivers were runner-up in that section.

This group of volunteers were concerned about the wellbeing of Maori in Alexandra and the surrounding districts.

It had built a whare on the Dunstan High School grounds which was a point of contact for those who wanted Maori input in their activities.

The Alexandra BMX Club won the sport and leisure section.

It had upgraded the BMX track in the town and hosted the South Island BMX championships earlier this year.

The new Alexandra Kindergarten building opened last week and its building committee has won the educational and child-youth development category of the awards.

Miss Gray said the committee spent many volunteer hours researching and investigating design options, raising funds and helping with the project on site.

Clyde Playcentre was the runner-up.