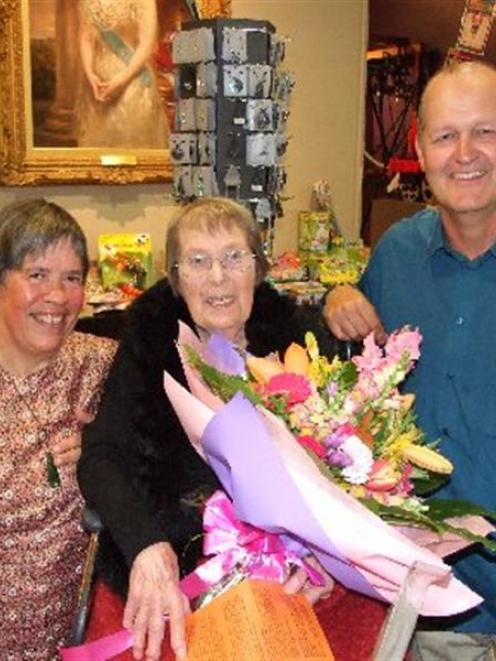 Henderson Arts Trust patron Barbara Henderson (centre) with the 2009 artists-in- residence Gillian Whitehead and Warwick Freeman. Photo by Lynda van Kempen.
The arts equivalent of a gold medal has been presented to two artists in Alexandra.

Dunedin composer Gillian Whitehead and jeweller Warwick Freeman, of Auckland, were welcomed as the 2009 Henderson Arts Trust artists-in-residence on Friday.

A function attended by about 100 people was held at Central Stories to mark the occasion and trustee Grahame Sydney said the idea of the trust was to give a "gold medal to reward fabulous careers of artists."

"You can't apply for this artists-in-residence scheme - we select them and ask them to come here", Sydney said.

"They're not under any pressure to perform, as such. It's our gift to them."

The trust was set up by the Henderson family.

The late Russell Henderson was a businessman and entrepreneur and his widow, Barbara, is founding patron of the trust.

Henderson House, designed by Austrian architect Ernst Plischke, on Bridge Hill, Alexandra, is the setting for the residency.

Outgoing artist-in-residence, photographer Peter Peryer, said there was no other residency like it in the country.

"Usually something is expected of you in return for such an award. You usually have to write reports about what you've done; a 'what I did in the holidays' kind of report.

"This is a very adult way to run a residency.

"Alexandra and the Henderson trust have offered a wonderful gift with this residency and it has a great future."

Freeman has designed and exhibited contemporary jewellery for more than 35 years.