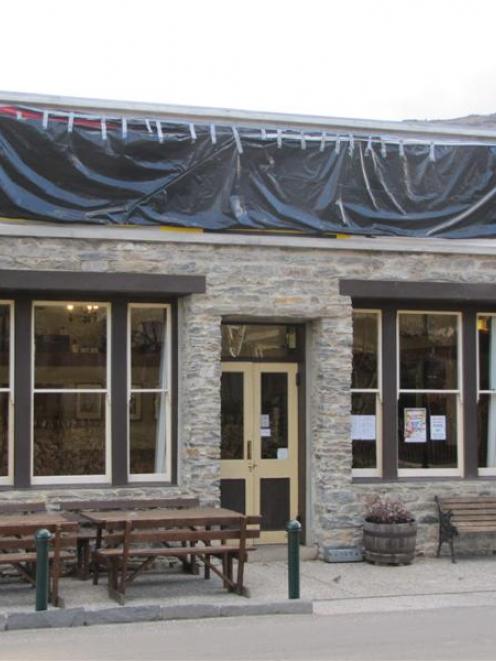 The Dunstan Hotel sign at the centre of yesterday's Central Otago District Council hearings panel has been covered up since May after a complaint about it. Photo by Colin Williscroft.
Clyde residents were becoming increasingly concerned over a lack of knowledge among builders and property owners about building and signage requirements in the town's heritage precinct, a Central Otago District Council hearings panel was told yesterday.

Promote Dunstan secretary Louise Joyce told the panel, which was hearing submissions on a retrospective resource consent application to alter an existing sign on Dunstan Hotel, in Clyde, that it was the third case in recent months where builders or property owners had run foul of the town's heritage precinct requirements and had to seek, or are seeking, retrospective resource consent.

The other cases related to signs on windows of Olivers restaurant, the railway mural and the building on the block behind Olivers.

"Project Dunstan is willing to hold a workshop where these requirements can be discussed and clarified. We feel this might avoid the problems ... being experienced."

The sign that was the subject of yesterday's hearing was put up in May this year. It featured the words Dunstan Hotel, was painted the same shade of blue used by Speight's in its marketing, incorporated a photo image of stonework from a neighbouring historic building and was bookended with two Speight's logos.

It was subsequently covered with a tarpaulin after it was discovered the hotel's owners, Tom and Nicola Blaikie, had not applied for land-use consent to alter an existing sign in a heritage precinct, as required by a heritage precinct rule in the council's district plan.

Their retrospective application attracted three submissions, two in support, Dunstan House and Dunstan Motors, and one against, Promote Dunstan.

The Blaikies were not at yesterday's hearing, which was originally scheduled for August 18, as they had booked a non-refundable holiday to Australia and thought the matter would have been dealt with last week.

Their representative, lawyer Kieran Tohill, said his clients believed the sign would complement the existing character and values of the Clyde historic precinct.

Not only would it cover up an incorrect name, Annan's Hotel, which was placed on the building during filming of the feature film Illustrious Energy in the 1980s, but the blue colour that had drawn criticism, was similar to shades of blue used elsewhere in the Clyde historic precinct, Mr Tohill said.

The Blaikies were contractually bound to have Speight's signs, Mr Tohill said.

"Speight's has been around since 1876 and it's not unusual for this hotel to be branded Speight's."

Ms Joyce said the focus on the colour was misleading.

"It's not just the colour blue we are objecting to. We are concerned about the size, design and colours of the proposed sign. We feel it is inappropriate and devalues a unique area, which has been recognised by the Central Otago District Council as a heritage precinct in its district plan."

The panel reserved its decision on whether to grant retrospective consent for 15 working days.

Hearings panel member Tony Lepper withdrew from yesterday's hearing as he had a business connection with the Blaikies.