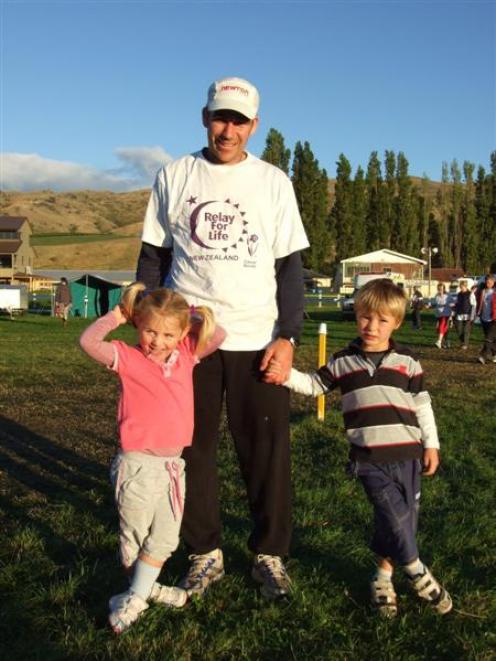 Cromwell athlete Terry Davis takes a break with his children Tori (3) and Matthew (4) during the relay. Photo by Lynda van Kempen.
Adventure racer Terry Davis probably had nightmares about running laps when he finally got to sleep yesterday.

The Cromwell athlete decided to use Relay for Life to see how far he could run and clocked up 100km in 10 hours, travelling 222 circuits of the Cromwell track.

"I'm not into training for anything," Davis said.

"Typically, I would never run this far. I just thought this was the perfect opportunity to see how far I could manage."

He completed the relay as sole member of his "team" and said family members had been affected by cancer.

Davis walked the first lap with his three children and then ran the next 222 laps before slowing to a walk for the remainder of the 24 hours.

"It was phenomenal. Although I was running on my own, other runners came and supported me. Most of them I didn't even know."

"They told me where to go, because I was busy looking at my feet all the way, and they made a path for me."

Davis said it was a novelty to be able to run such a long distance without having to carry food or drink.

He still felt good after his marathon effort, but said although physically he was fine, mentally the "race" was hard.