It was 57 years ago but Valmai Beeby remembers it like yesterday — the weight of the crown and the feel of the fur-trimmed regal cloak, trailing behind her. 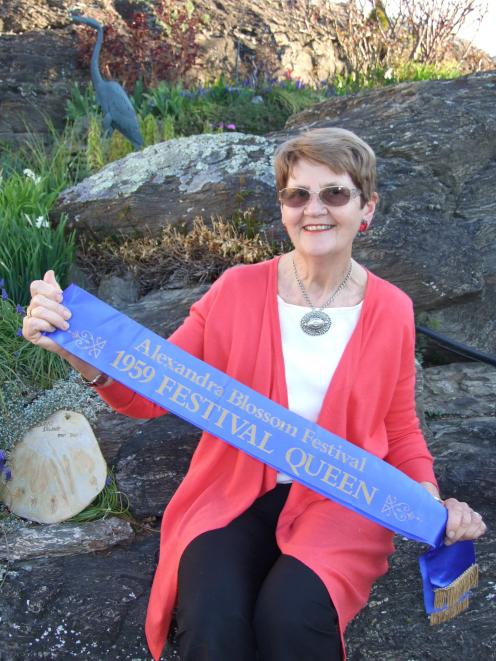 Valmai Beeby of Alexandra, is looking forward to reminiscing with the other Festival Queens at next weekend’s 60th Blossom Festival. Photo: ODT.
After all, it’s not every day a girl is crowned queen.

Working as a school teacher in Alexandra, Valmai O’Donnell, then aged 22, was the princess on the Central Otago News float titled "All on a Summer’s Day".

She cannot recall how she came to be asked to be the princess, but her connection was through the late Elizabeth Stevens, the wife of the newspaper owner.

"I was so thrilled to be asked. I wore a layered pink net dress of my own, ballerina length, and remember the details like the cellophane flowers and butterfly wings on the float and it was a rather cool day."

Newspaper reports said a crowd of 22,000 attended the 1959 festival, including about 500 people who travelled from Dunedin on the excursion train.

"Fine weather and more imaginative design of the floats were the major factors in the success of the day and there was a wide variety of entertainment in the Recreation Ground  [Pioneer Park]," the Central Otago News reported.

Mrs Beeby recalls waving to the crowd along the procession route and being amazed how many people were watching the spectacle.

She had recently moved to Alexandra from Southland so it was her first time at a blossom festival.

Her float was judged the winner, so she was announced as festival queen and was asked  to address the crowd following her crowning.

"I remember I was wearing a tiara, so swapped it for the crown, which was quite heavy. They also placed a long, heavy cloak on me, trimmed with white, and it had a train, so someone walked behind me, holding it up. It was all very regal."

Her prize was a box of chocolates and Mrs Stevens gave her a set of earrings and matching bracelet as a thank-you.

Her "duties" as queen involved taking a week off work to attend festival events.

She had already met her husband-to-be, Richard Beeby, and he accompanied her to the festival ball that evening.

Mrs Beeby (79) still has her sash, carefully packed away, plus clippings and photographs from the day.

Although she and her late husband shifted to Southland and then Christchurch, they moved back to Alexandra to retire, about 22 years ago.

Since then, she has been actively involved in most of the blossom festivals, helping out with floats entered by the combined Lions clubs.

Decorating floats was always a social time, she said : "It’s no trouble to get people involved".

She  is delighted to have been invited, along with the other festival queens throughout the years, to several functions next weekend marking the festival’s 60th birthday.

Festival committee chairwoman Clair Higginson said all was shaping up well for the milestone occasion and it was important to have the former queens as special guests.

"The generational thing is the absolute essence of why blossom festival has continued for so long. Everyone identifies with the festival queens, so inviting them back, having them here to help us celebrate this milestone was really important."

The queen contest had changed in recent years.

They met the judges at a few official functions before the float procession and judging was based on their achievements and personality.

They are still crowned at a special ceremony in Pioneer Park on Saturday.

"Having a princess on each float remains a point of difference for this festival.

"It’s always been an element and there’s no suggestion of it fading away.

"It could be seen as an anachronism but the person that becomes the queen is not a superficial figurehead," Ms Higginson said.

"It’s not a beauty contest and they display a very strong sense of identity with Central Otago and Alexandra in particular. They’re articulate, impressive young women who are great ambassadors for us."