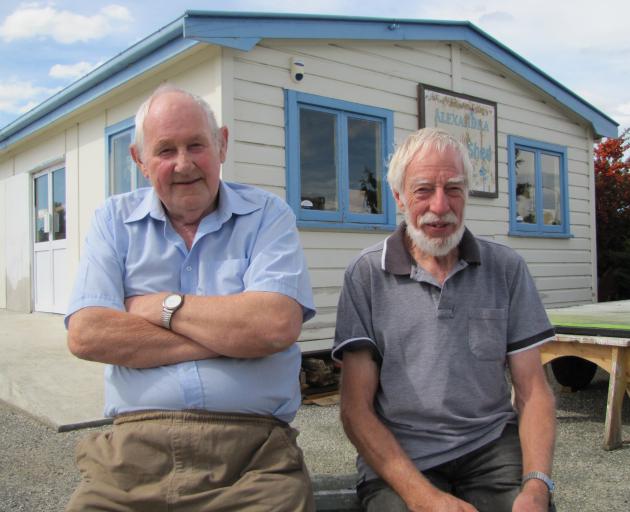 Alexandra Men's Shed trustees Neil McArthur (left) and Trevor Goudie celebrate a $200,000 grant from the Central Lakes Trust that will go towards construction of a new men's shed. Photo: Pam Jones
The Alexandra Men's Shed has been granted $200,000 from the Central Lakes Trust towards construction of a new shed.

The Men's Shed received the most funding for an organisation from the Central Lakes Trust March funding round, announced yesterday.

The new facility, to be built about 150m from the existing shed, within the Alexandra bike park on Molyneux Park, will be about five times the size of the existing shed and allow the group to more than double its membership.

''We're halfway towards our target now.''

They needed $400,000 to build the shed and were in the process of applying to the Otago Community Trust for more funding.

They would apply to smaller funding organisations and may crowdfund if they needed any extra cash at the end.

Construction would start once all funding was secure which Mr Goudie hoped would be in a year.

A new ambulance for Queenstown Lakes is also a step closer following a $100,000 grant for St John Wakatipu to go towards its purchase.

It formed part of a national St John plan where ambulances which travelled more than 400,000km or were more than eight years old were replaced.

St John South Island spokesman Gerard Campbell said a new ambulance which had been converted and ''fully kitted out'' cost about $225,000.

St John also benefited from last year's Shotover Jet locals weekend, which raised $10,792. However, it was unclear how much more funding was required before a new ambulance could be purchased.