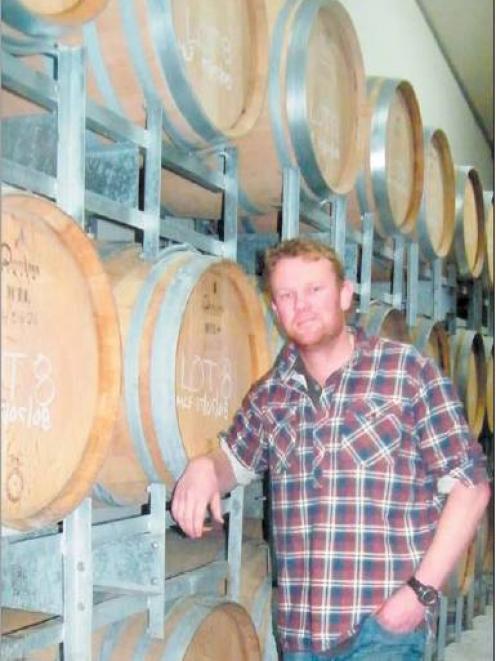 Next crop of top wines: Hinton Estate Vineyard winemaker Howie Hinton was delighted to hear recently that Hinton’s 2006 pinot noir had won a gold medal in the International Wine Challenge.
An Alexandra wine producer has gained recognition on the international stage, winning a gold medal in one of the world's largest wine competitions.

More than 9000 wines were entered in the 2008 International Wine Challenge, which is based in England, and Hinton Estate Vineyard scored a gold with its 2006 Pinot Noir.

‘‘We're delighted to get the gold and this is the highest accolade our wines have received so far,'' winemaker Howie Hinton said last week.

Mr Hinton, his wife Sarah and his parents Nigel and Elisabeth established the vineyard at Earnscleugh in 1998 to complement the family's summerfruit orchards.

‘‘The first vines were planted on our Blackman Rd property where we had steep, northfacing schisty hillsides available - too steep for fruit trees,'' Mr Hinton said.

The vineyard now covers 25ha, with the bulk of the plantings in pinot noir, but some pinot gris, riesling, viognier and gewurtztraminer grapes as well.

Hinton wine is exported to Australia and the United States and negotiations are taking place to export to Germany.

‘‘It's really a great boost to all the Hinton staff to have wine judges regard the wine so highly,'' Mr Hinton said.

‘‘Of course, this kind of accolade is also helpful in the marketing department, especially as this is an internationally recognised competition.''

There were 26,000 bottles of the gold medal-winning pinot noir but it had yet to be released on the market, he said.

‘‘We won't be rushing it out. Once it's been in the barrel for a year, then we like to leave it a good year in the bottle to fully develop its flavours [before it is marketed].''

More than 370 winemakers, merchants and writers from throughout the world were involved in the first round of judging the International Wine Challenge and up to 1500 wines were assessed daily.

In the first round, wines from the same category were pitted against each other. Wines scoring more than 85 points out of 100 were sent into the second round of judging, where judges decided which, if any, medals they should receive.

Gold medals were awarded to wines which scored between 95 and 100 points.

All potential medal-winning wines were then tasted by the competition's chairmen to endorse the judges' decisions and finally the identity of the medal winners was revealed, Mr Hinton said.

This was the first time Hinton Estate Vineyard had entered the event.

It was very much a family business, he said.

The first family orchard block was bought in 1910 and, since then, the family had been primarily involved with the growing and marketing of pip and summerfruit, before diversifying into growing grapes as well.

Mr Hinton completed a postgraduate diploma in viticulture and oenology (winemaking) at Lincoln University and he and his wife had worked the 2001 vintage in California to broaden their knowledge and experience.