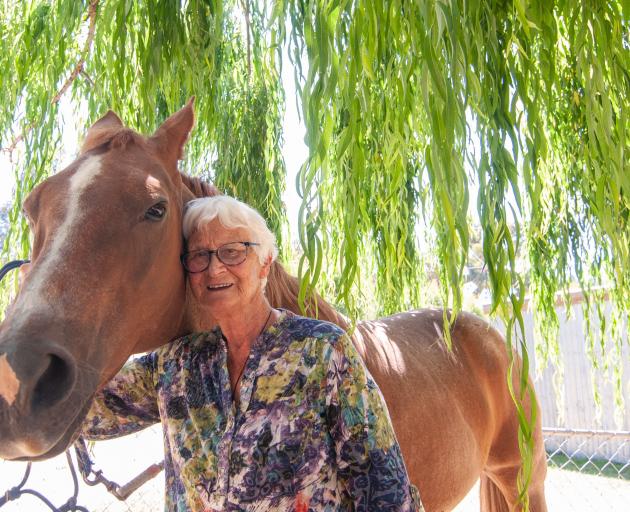 Jeanette McKay pats horse Josh ahead of the 30th Goldfield Cavalcade next month. PHOTO: SHANNON THOMSON
Thirty years ago Jeanette McKay took to the hills on horseback and never looked back.

Decades later, the 77-year-old is still an avid horse rider, and will embark on another Goldfields Cavalcade next month, depending on Covid-19.

At present, Cavalcade organisers are assessing the impact of the move to the Red traffic light setting.

"I’ve done every one — I’ve got all the badges to prove it," Mrs McKay said.

The Alexandra woman’s recollection of the first cavalcade in November 1991 is still sharp.

Having heard about the trek and friend Deidre McKenzie telling her she was going to do it, she figured it was a good idea.

"I’ve always liked trekking in the hills — it’s better than practising going round in circles."

She packed a chaff sack — "that’s all we were allowed, which had to include bedding and food" — and headed for the start of the trail.

The three-day trek left from Rockland’s Station near Middlemarch and retraced the Cobb & Co. Coach’s journey from Dunedin to the Dunstan Goldfields via the Dunstan Trail, ending in Cromwell.

More than 220 people took part with horses, wagons and carts, gigs and buggies, bunking down in woolsheds as they went.

"We had quite a variety of riders ... It was quite exciting."

It was not all smooth riding in the beginning, however.

On the morning riders set out, one of the carriages struggled to get up a hill and tipped, and poor weather caused some riders to develop hypothermia.

"Hypothermia — I didn’t even know about it and that was early in the piece."

Despite such incidents, the cavalcades had been great fun.

There were "hoolies" (parties) in the Styx jail and primary school children "bandits" held them up hoping for a gold coin.

"We didn’t know 30 years later we would still be going."

"It’s the country you see. The stations I’ve trekked on — you would not get to see them otherwise ... There’s some wonderful hill country around — they’re usually closed and you can’t get to them anymore.

"And you meet people from all walks of life, share their stories. So many fantastic horses — it was a real adventure.

"Just going with everybody and the excitement of it — it just grabs you.

"Anybody who has a passion for something understands how it is, you know — you get the butterflies and the heart goes ... I love it."