Hairy, hungover - and a hit on Masterchef 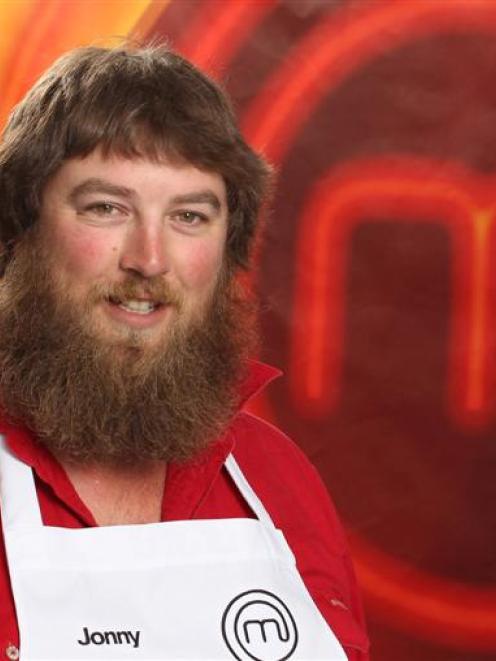 Tarras farmer Jonny Trevathan made it through to the top 24 contestants on Sunday night's television debut of the fourth series of MasterChef New Zealand. Photo courtesy of TVNZ.
Hardy, hairy and hungover - Tarras high-country farmer Jonny Trevathan and his home-kill venison dish won favour with the judges on episode one of MasterChef New Zealand's fourth series.

Fresh, or rather not so fresh, from an all-nighter, a bushy-bearded Mr Trevathan was shown nodding off in the Auckland audition waiting room on Sunday night's 2013 debut of the television show.

His entertaining back-story footage showed him trundling around his family farm near Tarras on a tractor, with beer in hand, and telling the camera he had entered the cooking competition to ''represent the rural society''.

Most memorable in his preamble, was his comment: ''I like to cook meat, except for chicken. To me chicken's like a ladies' meat, so it's more of a vegetable.''

Standing before the trio of judges, he confessed he had only made it home from his night out in the big smoke at 7am that day, but his bender had netted him $14,000 at the casino, so it was worth the effort.

Clad in his Young Farmers shirt and pair of moleskins, with a laid-back, straight-talking attitude to match, he acknowledged presentation was not his strong point.

''I don't get a lot of appreciation from the dogs when I throw them a lump of meat each night.''

However, his venison backstrap - courtesy of a hunting trip in the Lindis Pass - with red currant jus, baby potatoes and stuffed mushrooms, was enough to impress the judging panel and earn praise from Ray McVinnie on the ''purity of the flavours'', putting him through to the next round.

''You better perform,'' McVinnie cautioned a beaming Mr Trevathan, who was among the top 24 contestants selected from more than 1000 hopefuls. Eight contestants will be eliminated during next Sunday's episode, but bound by a strict confidentiality agreement, Mr Trevathan cannot reveal how far he progresses on the show - filmed over three months last year.

However, he said yesterday he was ''happy enough'' with the way he was portrayed on the show, which he had watched at the Luggate Pub with a group of mates.

''I think people perceived me the way I expected.''

Since the episode aired he had been inundated with phone calls, emails, texts and Facebook messages, from friends and strangers, he said.