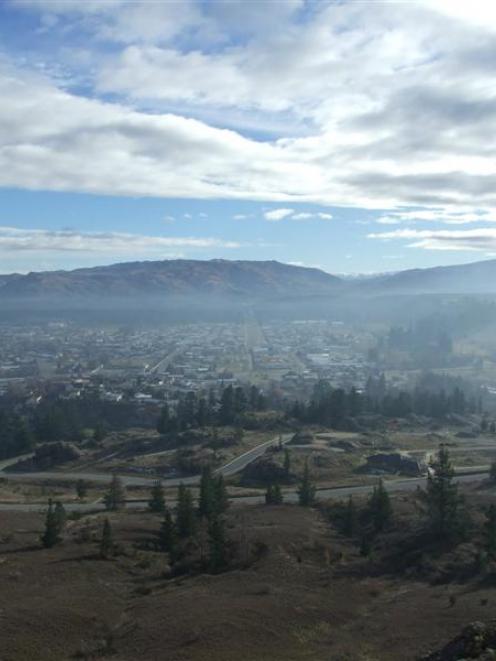 Smog lingers over Alexandra. Photo by Lynda Van Kempen.
This winter will be the last that many Central Otago residents will be able to legally light open fires and older, inefficient wood or multifuel burners.

New woodburner standards apply to towns classified by the Otago Regional Council as Airzone 1 - Alexandra, Cromwell and Clyde in Central Otago and Arrowtown and Milton elsewhere in Otago - from January 1, 2012, to help reduce air pollution in those communities.

Regional council director of policy and resource planning Fraser McRae said from that date, two new standards would come into effect that would determine which woodburners could be installed.

Firstly, all woodburners that had an emission discharge rating of less than 0.7g/kg of fuel burnt and an efficiency rating of more than 65% were permitted, Mr McRae said.

The second group of permitted woodburners comprised all those installed before April 14, 2007, in Alexandra, Arrowtown, or Cromwell; or April 1, 2009 in Clyde, with an emission rate of less than 1.5g/kg of fuel burnt and a thermal efficiency rating of more than 65%, he said.

"In effect, these rules mean that open fires and older, inefficient wood burners and multifuel burners are banned."

Policing those rules would not involve going into every home to check burners were compliant. "Initially, it will be done through observation and complaint," Mr McRae said.

"Many people would have invested a lot of money cleaning their own heating system up and they won't be impressed if their neighbour still has a choking old fire." Regional council Clean Heat Clean Air Programme manager Jeff Donaldson encouraged people to take advantage of the subsidies available for the removal of their old fire or burner and the installation of a new, compliant one as the level of subsidy could change.

"People should take advantage of them [subsidies] now as there may not always be the same amount available.

"Some of the money for the subsidy is regional but some comes from the Central Government and there could be changes as the Government redirects resources following the Christchurch earthquake," Mr Donaldson said.

To be eligible for subsidies, homes must have been built before 2000.

Generally speaking, any woodburner more than five or six years old would not meet the standards, Mr Donaldson said.

Grey Power Central Otago secretary Jacqui Goyen, of Alexandra, said many people she had spoken to were worried that they would have to replace their open fires or woodburners. "There's an awful lot of concern out there.

"People can see there is a need for change. The problem is those people who are making the decisions live in the North Island and don't know what it's like here during winter."

One of the biggest concerns, Mrs Goyen said, was many of the heatpumps available only heated one room, whereas people's older-style woodburners heated the whole house.

"And heatpumps only heat from the knees up, which leaves you with cold feet."

However, the subsidies available to help put in new woodburners were helpful, she said.

"I would encourage people to take advantage of them as soon as possible.

Mrs Goyen said she had discussed her concerns with the regional council and was preparing a submission on the subject that she would send to every organisation she thought would be interested.

Mitre 10 Home Store Alexandra manager Colin Verry said he had noticed an increase in inquires about and sales of new, compliant woodburners during the past 12 months.

"There's been a steady stream.

People are aware of the changes coming and they want solid fuel burners because they like wood fires.

"But even with a clean air fire, you need to use seasoned, dry timber if you don't want smog," Mr Verry said.

• Woodburners more than five or six years old do not meet the standards.

• The aim is to reduce air pollution