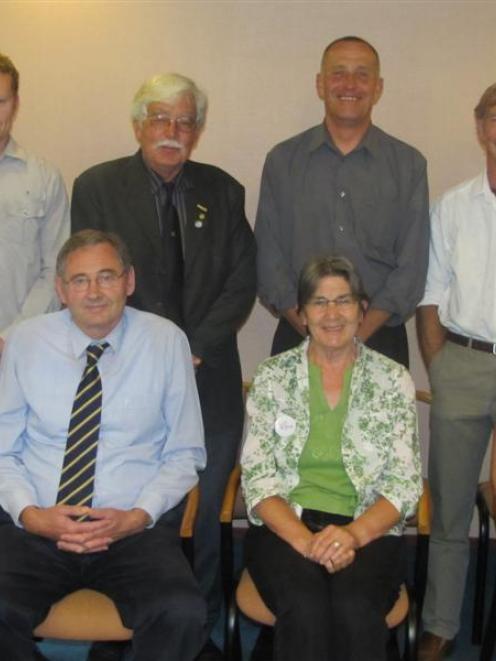 The newly-elected Vincent Community Board met in Alexandra for the first time yesterday. Members are (back row, from left), Trevor Breen, James Armstrong, Martin McPherson and Barrie Wills; (front row, from left) Tim Cadogan, deputy chairman Graeme Bell, chairwoman Clair Higginson and Claire Goudie. Photo by Colin Williscroft.
Two 30-year-old trees in the centre of Alexandra will be spared the chainsaw after supporters pleaded for their retention yesterday.

The Vincent Community Board rejected a proposal to remove the trees, next to Central Stories Museum and Art Gallery at Pioneer Park, to allow the laying of a multi-purpose artificial surface on part of the existing rundown tennis courts at the park.

Although on land leased by the Central Cultural Centre Trust, the trees, a walnut and an ash, were on the boundary and their roots were seen as potentially undermining the artificial surface. The trust asked the board to spare the big trees.

Board member Tim Cadogan, a lawyer, told the meeting the board had no legal right to recommend to the Central Otago District Council the trees be removed, as the lease between the council and the trust stated that the lessor was responsible for the ongoing maintenance of all landscaped areas.

"So, even if we wanted to cut the trees down, we couldn't without written consent from the trust."

Mr Cadogan also recommended that, if asked, the board should not contribute any extra funding towards the cost of moving the proposed multipurpose surface so it was halfway between the museum and McArthur Gardens, on the corner of Centennial Ave and Tarbert St.

A report estimated that to move an area the size of three tennis courts would cost between $60,000 and $90,000 extra. Some money had been pledged, but it was unclear how the rest of the money needed for the project would be raised.

"Rates are phenomenally important right now. We do not have the money available to move the pad [for the surface to be built on]," Mr Cadogan said.

If, by the time the community board met in February 2011, a solution had not been found, then the whole project should be abandoned and the old tennis courts ripped up and replaced with grass, or something similar, Mr Cadogan said.