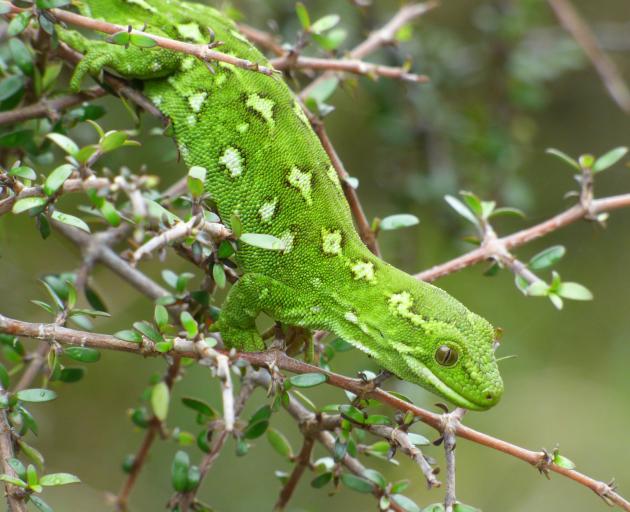 Eight pregnant females, three males, two sub-adult males and one sub-adult female were taken from the Lammermoor Range by trust volunteers and Wildlands herpetologist Carey Knox before they were transported to their new home.

Mr Knox said the species was found across Otago and Canterbury, although human influence, land clearing and introduced predators had restricted their range to small pockets.

``They're basically extinct as far as we can tell in Central.

``It's pretty cool to be able to reintroduce them to their historic range.''

The lizards were caught from the Lammermoor as it was the closest location to the sanctuary, but they would now have to adapt to a lower altitude and a change in vegetation, he said.

``This is a totally different habitat from what they came from. [But] we think these geckos are fairly adaptable.''

The population where the geckos had come from had made the transition from beech forest, which had been cleared, to tussock.

He had assessed the site before the trust put in an application to the Department of Conservation. The trust is now licensed to translocate up to 60 geckos.

Mr Knox said more individuals would be released in the coming weeks.

He and trust volunteers would then monitor the species until winter, when the geckos would begin hibernation.

Monitoring was a simple and non-invasive process which involved photographing the unique markings on each lizard.

The ID of each gecko was then compiled in a database to help monitor survival rates and population trends.

Mr Knox said the lizards could be ``cryptic and pretty hard to spot'', and some may not be seen for a couple of years.

He hoped it would be a stepping stone to introducing other native species into the sanctuary, including grand and Otago skinks, green skinks, and tree weta.

Surveillance would now be put in place around the sanctuary, he said.