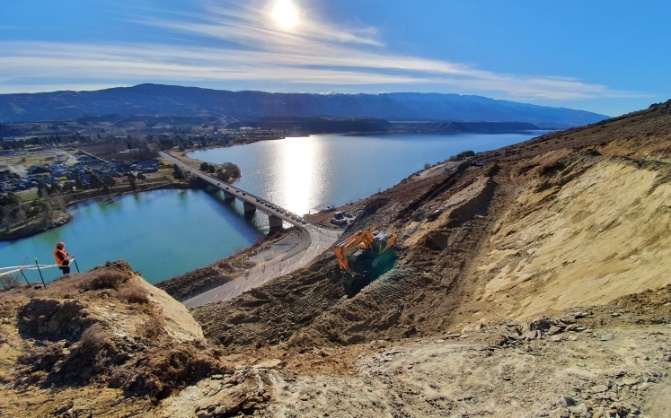 The overview of the slip site above the Deadman’s Point bridge near Cromwell yesterday, with benched area to the right. Photo: NZTA
Road users can expect a slip-affected stretch of highway in Central Otago to be "back to business as usual" in about a fortnight.


The slip occurred above State Highway 8 on Tuesday two weeks ago after a sizeable piece of rocky hillside – about 30m long, 20m wide, and 15m deep – began to move.

Traffic has been restricted since the slip, with the road down to one lane and controls in place.

Waka Kotahi NZ Transport Agency said today that for the past fortnight helicopter crews had been sluicing the slope  - near the intersection with State Highway 8B and Deadman's Point bridge - to bring down loose material, followed by diggers and an abseiling team dislodging fissured rocks.

“There was no major movement of the slip over the weekend,” Waka Kotahi Maintenance Contract Manager Mark Stewart said.

Crews had been able to “bench” the slopes above the road to create landing areas for rock and reduce the energy of any of the schist rock making its way to the ground, where there is a rockfall fence and a line of containers protecting road users.

“The work focus now is about moving the slip material safely to the ground. In the following weeks, the rocks will be moved off site and the rockfall debris fence reinstalled, before we remove the container barriers.

“The speed restrictions and road cones will remain in place until the catch fence is fully restored and the containers removed – another fortnight or so.

"But, delays for road users should be much shorter than over the past fortnight. Thanks to all drivers for being patient and for continuing to slow around crews.

“Given the significance of this stretch of highway in Central Otago, along the Cromwell Gorge, with no comparable detour route, it will be good to have this road stabilised and back to business as usual in a fortnight or so,” says Mr Stewart.