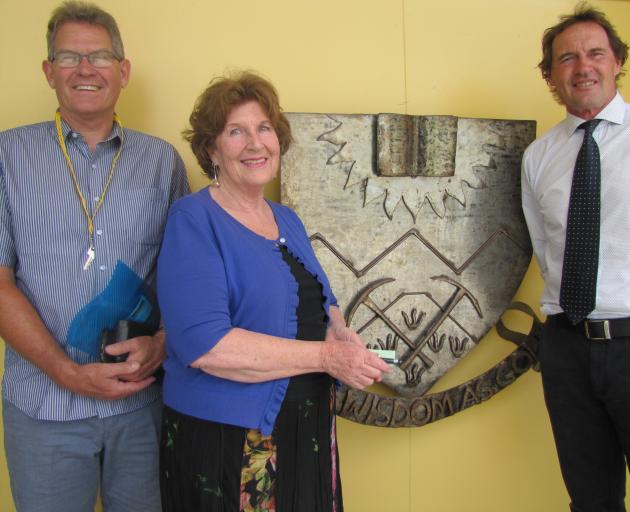 Retiring Dunstan High School assistant principal Mark Willyams (left), deputy principal Bev Anderson and assistant principal Alan Hamilton reflect on their decades at the school. The three are all retiring this year after a combined 83 years at Dunstan. Photo: Pam Jones
They have taught right across the curriculum, disciplined a few pupils and mentored a lot more.

But for three retiring deputy and assistant principals at Dunstan High School it is an even deeper commitment that has brought the real magic to their treasured teaching career.

‘‘It’s like they’re [school pupils] your own children,’’ deputy principal Bev Anderson said. ‘‘The pride that you feel almost brings tears to your eyes.’’

Ms Anderson and assistant principals Alan Hamilton and Mark Willyams all retire this year after a combined 83 years at Dunstan High School — Mr Hamilton has worked at the school for 36 years, Ms Anderson 24 and Mr Willyams 23.

Principal Reece Goldsmith said to lose three such ‘‘highly respected’’ school leaders — who made up the entire tier of deputy and assistant principals at the school — was a significant loss.

‘‘They will of course leave a huge hole in the fabric of Dunstan High School and in some ways are irreplaceable. All three of them have exhibited an unwavering commitment to generations of students here at Dunstan and I know there must be thousands of members of our community who owe a debt of gratitude to the support given to them by three people who have so generously given so much to develop not just great students, but great young men and women.’’

Ms Anderson said as well as their teaching, the three had also treasured bringing up their own children in Alexandra and the additional close ties that created.

‘‘We’ve been friends as well,’’ Ms Anderson said. ‘‘Our kids have been similar ages, and there are lots of things we’ve done together not just at school but beyond school so it’s been pretty special, it’s been really special to be able to have that sort of kinship.’’

Mr Willyams said building, valuing and respecting relationships with pupils was key to supporting young people. It was not the ‘‘regular lessons, planned and executed’’ that stood out the most, but rather ‘‘the school trips, good people and life lessons’’.

Mr Hamilton said the community’s support for the school had been crucial, and he was proud of its ‘‘old-fashioned’’ values, which he said were typical of pupils from small schools.

‘‘I’m happy to belong to an awesome school. I’ve enjoyed the ride.’’

All three were proud to have helped produce ‘‘decent’’ pupils, and to see them go on to happiness and success in many different ways.