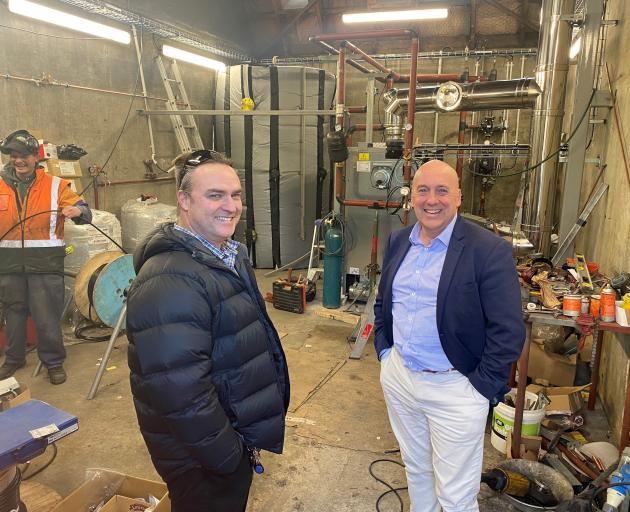 The system is cleaner, low-emission and more sustainable than its predecessor — up to 93% energy efficient compared with the estimated 60% efficiency of the old coal burner.

CODC property and facilities manager Garreth Robinson said the system allowed the council to reduce its carbon footprint, as well as save money.

"Coal price is subject to carbon tax, and this is rapidly driving up fossil fuel prices.

And as we know, coal is a non-renewable fuel, with high dust emission."

The use of coal came with additional labour and disposal costs — it was required to be manually de-ashed and the grate raked out, with the ash disposed of to landfill,

"Not only that, coal is unpleasant to handle and exposure to coal dust has potential respiratory risks."

Converting to the woodchip boiler, was a win-win, he said.

"Woodchip fuel is at present not subject to carbon tax. It has very low dust emissions."

The woodchip fuel will be sourced from Otago plantation forests keeping it fully renewable and carbon neutral. Carbon released during combustion is absorbed as new trees are planted in the forest to replace those chopped down.

"The other efficiency is that the ash is automatically removed into the ashbin. Premium woodchip fuel from pine wood has a very low ash content. Ash is organic and may be used on our property grounds to help fertilise shrubs and plants (best mixed in with some bark of woodchips)," Mr Robinson said.

"This is the start of a cleaner, greener chapter for us with new efficiencies.

"Sustainability is a key outcome for the council and our community."

Central Otago Mayor Tim Cadogan said this conversion was just one small part of the programme designed to reduce the council’s carbon footprint.

"Council declared a climate crisis in September 2019 and followed that up by endorsing a plan last year to reduce its carbon footprint by 55% over five years.

"Getting rid of the old coal-fired burner is great to see and initiatives in other areas, especially in waste, are going to see us achieving that goal," Mr Cadogan said.