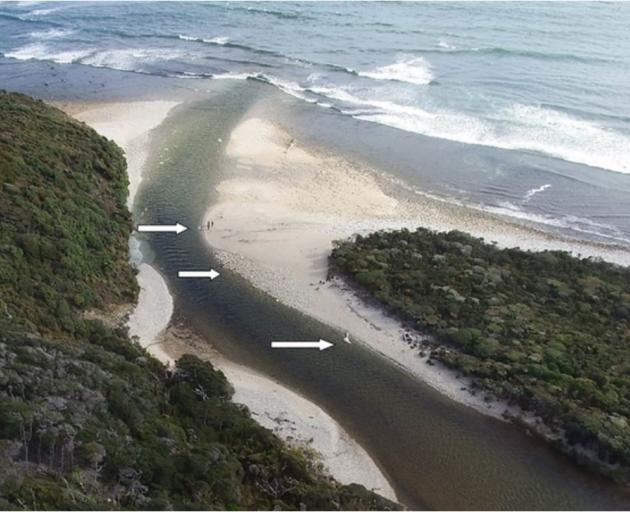 Approximate location of the whitebait nets at the mouth of the Waitutu River. Photo: DOC / Supplied
Three people have been found guilty of whitebaiting illegally on the Waitutu River, in Fiordland National Park.

David Egerton (54), of Otautau, Michael Egerton (45), of Tuatapere and Allan Rickard (52), of Cromwell, were found guilty of taking native fish (whitebait) from a National Park and possessing nets in Fiordland National Park.

It is an offence under the National Parks Act 1980 to fish for whitebait in a national park without a specific authority.

The penalties for an offence under the Act include fines up to $100,000, a term of two years' imprisonment or both.

"Whitebaiting in National Parks without authorisation is illegal. The south coast boundary of Fiordland National Park is the mean high water spring mark, which crosses all main rivers, including the Waitutu."

Efforts had been made to communicate to fishers where that boundary was, he said, which included engaging a surveyor, putting up notices in huts and speaking directly with fishers in the area.

During the judge-alone trial, Doc presented evidence including survey plans, maps and photos showing exactly where the defendants were found to be fishing, which Mr Preston said was clearly above the high water mark.

"Doc has been undertaking compliance checks and communicating with fishers in this area for some time now and most people do follow the rules.

"Ultimately, it's the responsibility of whitebaiters to check they are legal on their chosen river. Ignorance is no excuse."

The case was heard by Judge Stephen Harrop on February 14 this year and his judgement was delivered 30 September.

Sentencing is expected to take place next month.