High winds played havoc throughout the South yesterday afternoon, with power lines down, grass fires breaking out and flights cancelled.

This morning there are still some issues resulting from the wild weather -several roads are closed including the Haast Pass (State Highway 6), owing to flooding debris across the road.

The winds swept through much of Otago and Southland, with gusts up to 160kmh recorded at Mid Dome in Southland yesterday afternoon.

Gusts up to 130kmh were recorded in Wanaka.

Trees blew over and knocked down power lines in Ida Valley, leading to grass fires breaking out.

The airport recorded a 115km/h gust, smashing the previous strongest gust there by over 20km/h!

Police said a vehicle had driven into the downed power lines on the Ida Valley-Omakau Rd about 3pm.

The driver and passengers in the vehicle managed to escape without injury.

In Omakau, some stands at the Omakau Bowling Club were blown away and power was cut to the town for more than three hours in the afternoon from 2pm.

"It was really, really windy.

"The doors were opening all the time ... the whole building, the windows, were shaking," she said.

Matakanui Station owner Andrew Paterson said there has been some damage on the property.

“We’ve had a heap of trees come down around our house. Some of those trees are over 100 years old.

“We’ve lost the roofs off a couple of hay barns,” he said.

Mr Paterson said the warm wind had caused a lot of snow melt and, with heavy rain forecast, flooding could become an issue.

High winds resulted in a host of power cuts across the Central Otago/Queenstown Lakes network. 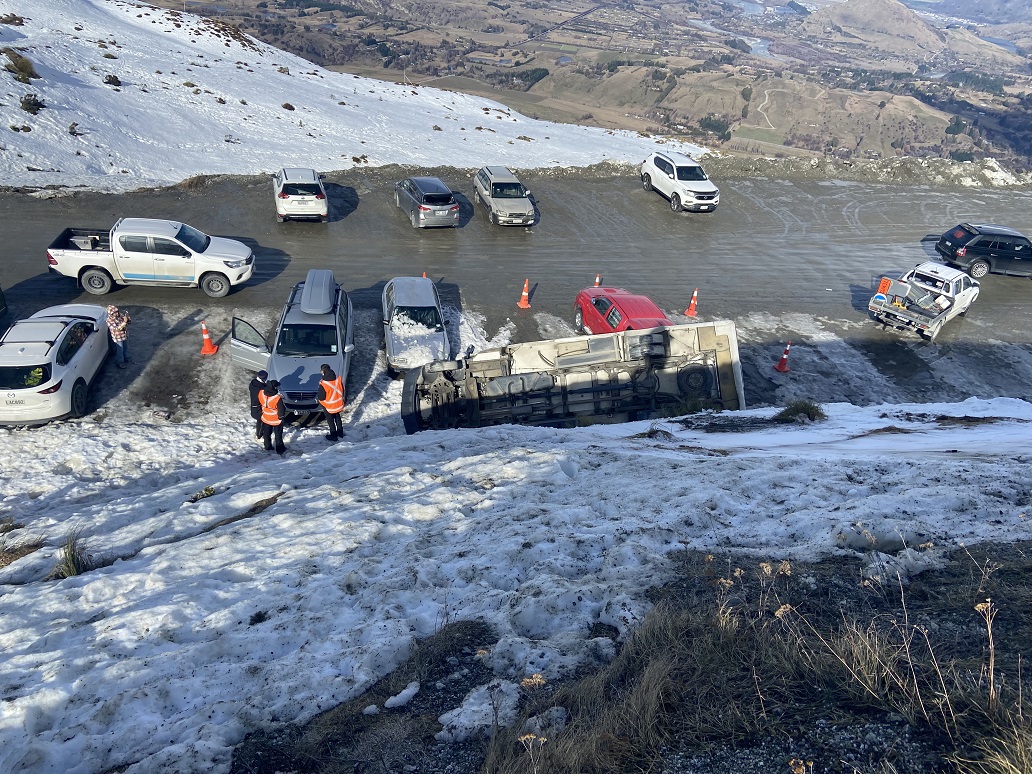 A campervan was blown over and rolled down a bank at the Coronet Peak car park. Other vehicles were reportedly damaged as well. Photo: Harry Neil
An Aurora Energy spokeswoman said customers in the Arrowtown and Gibbston areas lost power just before 5am because of wind damage. While most had their power restored before 8am, about 40 customers were without power until 1.17pm.

Aurora had been asked by Fire and Emergency New Zealand to "stay clear" of an area in the Ida Valley due to a fire.

There were also customers without power in other areas, including Shingle Creek and Fruitlands, due to weather-related issues, the spokeswoman said.

Seven flights into Queenstown from 12.15pm yesterday were cancelled, while a flight from Brisbane was diverted. That led to seven departure flights being cancelled.

Stuff reports that a campervan was blown over in the Coronet Peak car park, a snow gun was tipped over on the ski field, the t-bar lift was derailed, and several lifts lost sensors.

State Highway97 — Mossburn to Five Rivers — was closed about 2pm because of the strong winds, with the Southland District Council advising avoidance of the area.

A truck and trailer unit blew over on SH97 near Hillas Rd, while a campervan was blown over in the Mossburn-Five Rivers Rd about 2pm. The truck driver and the two occupants of the campervan were uninjured.

Wreys Bush-Mossburn Rd was closed between Cemetery Rd and Chewings Rd after large trees fell across the road.

Police advised road users around the southern district to be alert while driving due to the high winds.

By 5pm yesterday, about 1400 customers across the entire network were offline, including all of Omakau and surrounding areas.

Strong westerly winds swamped a fishing charter boat at Wanaka Marina yesterday afternoon, while other boats on the lake slipped their moorings but were quickly secured.

Polystyrene flooring was flying around the Pines area near Alexandra, and Poplar Grove in Alexandra was closed just after 6pm because of fallen trees.

In Dunedin, the temperature climbed above 20degC just after 6pm, the highest temperature in the country yesterday, though the wind was picking up.

Aurora Energy said an outage was reported in the Berwick-Maungatua Rd area after powerlines came down about 8.15pm yesterday and electricity was expected to be restored early this morning.

The MetService is forecasting snow to fall to 200m tomorrow over most of Otago and parts of Southland.

The snow is expected to continue through much of Monday.

Temperatures were forecast to drop as low as -3degC and the highs were not expected to reach double digits until the end of next week.