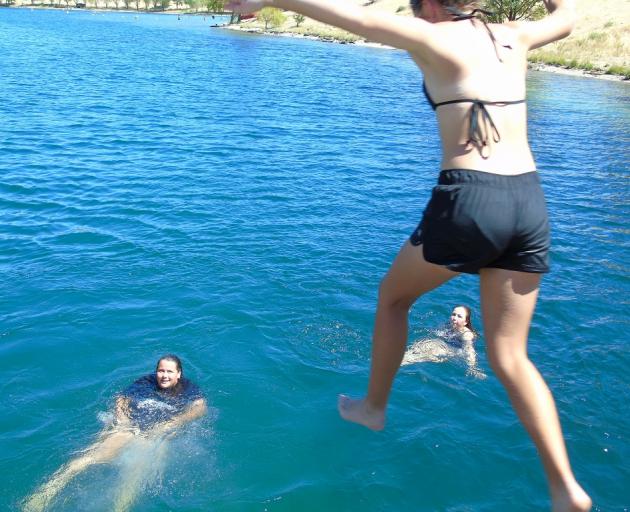 From left - Cromwell locals Ajah Clark (13), and Jayda King (16) look on as Billie King (13) makes a splash as they celebrate the last day of the holidays before they return to school. PHOTO: SIMON HENDERSON
As Otago's smouldering heatwave continues more records have been broken, with Clyde and Middlemarch both hitting their warmest temperatures on record.

Otago has sweltered in the sun yet again, with Alexandra reaching 36degC by 4pm, Wanaka 33degC, Queenstown 32degC and Dunedin peaking at 27degC.

However, the hottest temperatures in Otago were reserved for Middlemarch and Clyde, with Niwa tweeting that it had hit 37.4degC at 4pm in Middlemarch, and 37.6degC in Clyde; both the hottest the towns have ever recorded.

It comes after 36.6degC was recorded in Cromwell yesterday, equalling its January record.

The Clyde record was also the hottest recorded anywhere in the country today and the eighth hottest January day in New Zealand since records began.

Medical authorities are warning people to keep out of the sun and avoid extreme physical exertion in the heatwave conditions.

People are also being told to drink at least 2l of water a day to stay hydrated.

Masterton is expected to be the hottest city in the north, reaching 33degC, and Taumarunui is also looking to reach 30degC. By 11am Masterton was 29degC.

Auckland is in for another brilliant day with 28degC - the fifth consecutive day the city of sails has nudged the 30degC mark.

Niwa this morning revealed the waters surrounding New Zealand were also significantly warmer than this time last year. Coastal sea temperatures ranged from 24C to 26C around Auckland and an even more tropical 26C to 28C in the Firth of Thames.

Today climate scientist Dr Jim Salinger said for the first 29 days of the year the average temperature across the country sat at 2.9C above average. With a further two days to go and even higher temperatures in store it was likely to be up to 3.1C above average.

He said it was the warmest month on record since reliable records started in 1867.

Those looking after the most vulnerable in our community were told to take care to ensure temperatures were cool enough whether it was in a workplace, school, rest homes or sporting and cultural events.

The co-convener of the country's climate and health council Dr Alex Macmillan said the heat posed serious health risks to the youngest and oldest in our communities and to those suffering from medical conditions.

"Take care as the heat rises especially if you're elderly, pregnant, or already have a medical condition. Babies and children are also more at risk with rising heat, while healthy adults who work outdoors are also especially vulnerable," said Macmillan.

"This is a good time to stay out of the heat, cool yourself down, drink plenty of cold non-alcoholic drinks and look after others, especially if they are vulnerable."

He said even short duration heatwaves could lead to a spike in heat strokes, heart and lung disease and deaths.

The Ministry of Education says the decision to stay open in the current extreme heat is up to individual board of trustees who are responsible for health and safety of all in schools.

The ministry recommends the indoor temperature ranges between 18-25degC for much of the year.

Head of Infrastructure Service Kim Shannon said where this was proving difficult schools were told to pull blinds in windows facing the sun, keep windows and doors open to allow a breeze through classrooms, switching on fans and make use of shaded designated outdoor spaces.

Shannon said parents with concerns about the environment their children was learning in was encouraged to contact the school in the first instance.