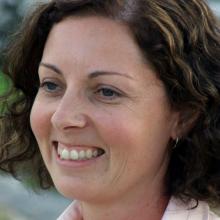 Elizabeth Soal.
The Waitaki Irrigators Collective (WIC) believes Labour’s water policy could lead to a growing rural-urban divide and the loss of millions of dollars from the Waitaki and Waimate districts.

Waitaki Mayor Gary Kircher has also let rip at the policy, claiming Waitaki irrigators could lose $25 million to $40 million if there is a change of government on September 23.

WIC policy officer Elizabeth Soal said the collective was keeping a close eye on Labour’s plans to charge irrigators a levy of 1c-2c per 1000 litres of irrigation water, and was "very concerned" about the implications of the proposed water royalty.

"This is not just in terms of the economic effects on farmers and the wider community, but also the potential unintended consequences, issues around implementation and administration, what the charge will mean for specific catchment outcomes, and that the framing of the public debate will see a growth in the urban-rural divide."

The WIC was concerned about the potential economic impact of any levy and where money collected would be spent, Ms Soal said.

"A 2c-per-cubic-metre charge will see millions of dollars taken out of the local economy in the Waitaki and Waimate districts.

"This will result in reduced spending in the local economy, it could affect jobs and there will be reduced discretionary spending on farm-level improvements.

"Potentially, the money raised from irrigation in the Waitaki could be spent in another district geographically far removed from where it was raised.

"We are really concerned around the equity of this and whether it will in fact result in better outcomes for catchments like the Waitaki, where there is generally good water quality."

"We all acknowledge that there are water-quality issues that urban and rural want to be working on together," Mr Strang said.

"This policy is very divisive because it basically says if you’re a farmer or irrigator then water pollution is basically all your problem, and that’s not the case.

"It’s almost like it was a knee-jerk piece of policy that was designed to grab urban votes."

Mr Kircher said he was concerned a water royalty could have a dramatic effect on economic growth in drought-prone North Otago, which has been transformed by  irrigation schemes over the past decade.

"It’s been costed out and if it’s at that level, irrigators will be paying something in the vicinity of $25million to $40million in Waitaki," Mr Kircher said.

"That will have a hugely negative impact."

At a meeting in Wanaka earlier this week, Mr Parker said the royalty would be "fair and affordable" and was targeted not just at farmers but at any large user who gained private profit from the use of water.

He has previously said money would be put back into water-quality projects in the regions where it was gathered.

Mr Parker and Waitaki Labour candidate Zelie Allan will speak at the Blind Foundation Hall in Oamaru from 6pm today.