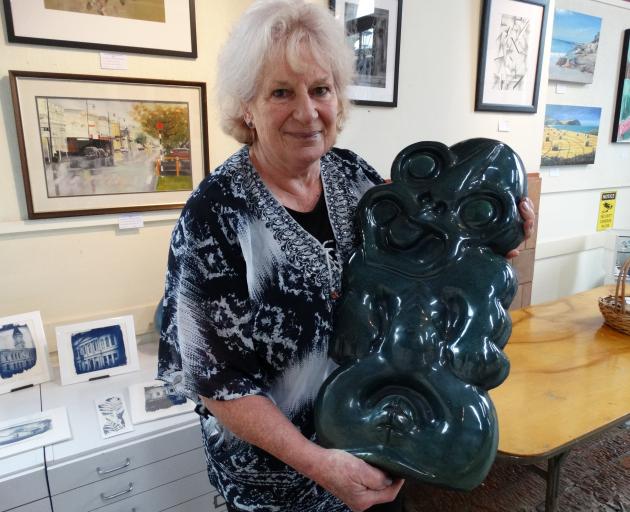 Oamaru artist Jill McIntyre is happy to be reunited with the tiki she created. The item was recovered by police after it was stolen from the Custom House Gallery in December. Photo: Daniel Birchfield.
A piece of Oamaru art is back after a bit of a tiki tour.

A large ceramic tiki stolen from Custom House Gallery in Tyne St last year has been returned to its rightful place.

The 50cm tiki, made by Oamaru artist Jill McIntyre, a hand-turned wooden bowl made of beech wood and a Christmas hamper were stolen from the gallery during a break-in on December 10.A 32-year-old Oamaru man recently appeared in the Dunedin  District Court charged with burglary. He pleaded guilty and was remanded in custody until sentencing at the Oamaru District Court on March 15.

The man, a freezing worker, had been drinking and was "moderately  intoxicated", police said.

He broke a kitchen window to gain entry to the gallery.

Once inside, he removed the tiki, bowl and hamper.

When spoken to by police, he said he had been drinking and had acted impulsively.

The man showed remorse and  paid for the costs associated with  the replacement of the broken window and the hamper.

Mrs McIntyre praised the efforts of police and said she was "over the  moon" when she heard the tiki had  been returned.

A North Otago Art Society  spokesman said the society’s  members were "delighted" when  they were told the tiki and bowl had  been recovered by police.

He said bars were to be installed on the building’s windows that faced on to alleyways.