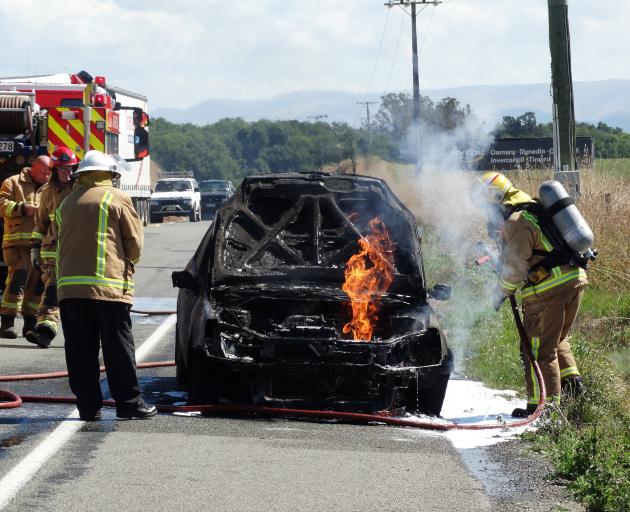 Firefighters work to extinguish a car fire at Totara, south of Oamaru, yesterday afternoon. PHOTO: DANIEL BIRCHFIELD
A Dunedin man's car may have been destroyed by fire after it burst into flames south of Oamaru yesterday but he was grateful for one thing - his golf clubs survived.

Two fire appliances from Weston were called to scene of the blaze at the intersection of State Highway 1 and Station Rd shortly after 3pm.

The car, a 2004 Mitsubishi Lancer, was well alight by the time firefighters arrived and took about 30 minutes to get the fire under control.

That was despite the efforts of members of the public, who stopped and attempted to put the fire out using fire extinguishers.

The owner and sole occupant of the vehicle, who did not want to be named, was travelling from Dunedin to Christchurch when his vehicle broke down and then burst into flames shortly after he pulled over to the side of the road.

He said the car started making ``rickety noises'' before he stopped.

He left the car after he noticed smoke billowing from under the bonnet.

The man had bought the car for $1200 a few months ago, to use as a ``bit of a runaround'', before he bought another vehicle.

It was not insured.

He was shocked but philosophical about the incident and was thankful his golf clubs in the boot, which cost him double what he paid for the car, were not damaged.

The man stayed overnight in Oamaru and planned to travel back to Dunedin by bus today.

Weston Volunteer Fire Brigade Station Officer Geoff Parsons described the fire as ``stubborn'', as most vehicle fires were, because of the combination of fuel, oil and alloys.

``This one was just another car fire. It could have been a lot worse if it was a lot more windy and headed to the paddock next door.''

One lane of the highway was closed while the fire was extinguished and traffic was managed by police.