Centenarian looks back on 'wonderful life' 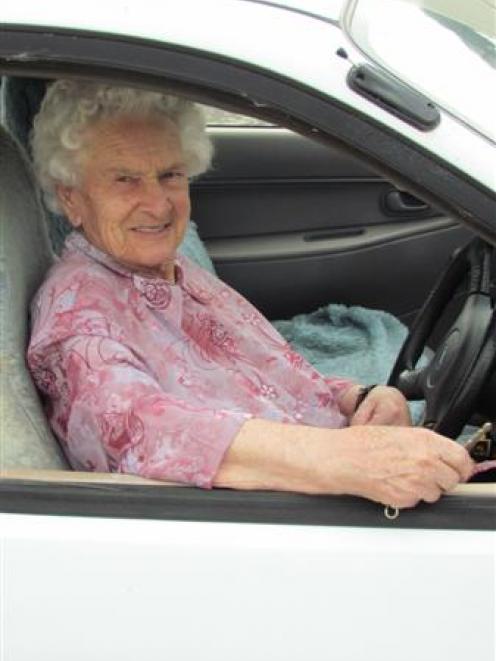 Her car, which she still drives, sits in the driveway of her home with less than 40,000km on the clock.

The near-centenarian, who lived in Glenavy before moving to Oamaru, still drives her car to the shops, is in remarkable health, reads the newspaper through low-cost reading glasses and takes the bare minimum of medication.

Tomorrow marks a century since she was born at Hillend, 29km from Balclutha.

In her living room yesterday morning, surrounded by photos of a smiling little lady holding very large salmon, she reflected on her life and times.

"I've had a wonderful life, really - nothing was ever a bother," she said.

The daughter of a contract plougher and shearer, and the eldest of nine children, she weighed just 3lb (1.35kg) at birth.

"I was spoon-fed but I was a battler," she said.

Her early years were filled with chores, as her parents had five boys before they produced another daughter.

She went to school near Hillend, outside Balclutha.

"There was a racing commentator the other day who said he'd never heard of Awamangu, and I was sitting here saying 'What the hell are you talking about? I went to school there."'

She married George Webster in 1931, and lived at Stony Creek for a time before moving to Kaitangata and then to Dunedin.

Mr Webster had the contract to haul coal to, and wool from, the Roslyn Mill, where Rita worked producing women's clothing and underwear before the mill switched to making garments for soldiers during World War 2.

Later, she would work at Coulls Somerville Wilkie before it merged with Whitcombe and Tombs in 1971 to become Whitcoulls, before returning from retirement to work in the kitchen of the Roslyn Mill for a further decade.

Mr Webster fought in Italy, then came home and died about 10 years later in Duntroon from emphysema, which Mrs Webster said he had before he left.

The pair had one daughter, who lives in Wellington, and generations later Mrs Webster is now the proud great-great-grandmother of a young girl.

She loves fishing, and has taken more than 180 salmon from the Waitaki River, the largest weighing 15.75kg.

She tells of a man who, unable to catch a single fish while walking up and down the river, wondered aloud how she managed to be so successful. She stayed quiet, but muttered under her breath that salmon "came to you" - not the other way around.

Whitebaiting in the Kakanui River was another favoured pastime: at times her nets were so full she would have to ask for assistance to pull them in.

She loved to crochet and knit, was a keen gardener and loved baking.

The highlight of her birthday will be afternoon tea at Annie's Victorian Tea Rooms with friends and family, possibly including her only remaining sibling, Glad Cross, from Wanaka.

However, the details of that were shrouded in secrecy, which she did not like.