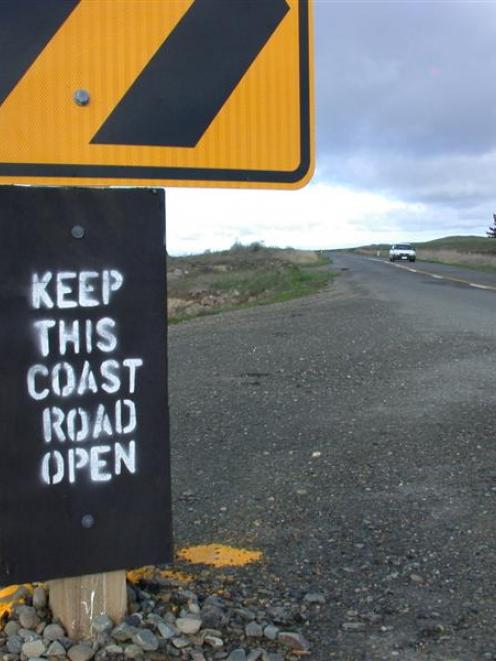 A sign which appeared at the corner of Beach and Thousand Acre Rds recently. PHoto by David Bruce.
Keep the North Otago coast road - between Oamaru and the Waianakarua River mouth - was the clear message given to Waitaki District Council councillors and staff yesterday.

The council learned what the public thought at roadshows held at Kakanui and Oamaru to discuss the council's draft coastal road strategy which looks at the cost of protecting the road from erosion by the sea, or whether sections should be abandoned when erosion got too bad.

The roadshows were supposed to be one-on-one discussions, but at Kakanui it turned into a public meeting for more than an hour, when about 50 people turned up.

The coastal road strategy estimates it could cost $20 million spread over five years to cope with ongoing erosion.

It suggests portions could be closed, including the stretch between All Day Bay and the Waianakarua River mouth and from the end of the road past the North Otago Golf Club to Thousand Acre Rd.

Farms and residences along the closed portions would be served from roads further inland.

Apart from keeping the road open, one of the major issues was the cost.

The council's assets group manager Neil Jorgensen emphasised the strategy was a draft, and the council wanted feedback from the community on the proposals and what it was prepared to pay.

Kakanui resident Luke Parry bought his property because of the coast.

Ratepayers should not just have to pay to protect the road, which he described as "a really significant coast highway".

"I think it's fixable, but we cannot lump it on just ratepayers," he said.

John Chapman said the council had calculated the cost of keeping the road, but asked if it had done a cost-benefit analysis of its worth to North Otago.

"Keeping the road has to have benefits," he said.

Mr Jorgensen said a cost-benefit analysis would be expensive and, before the council spent money on that, it wanted the views of the community.

"If it [the road] gets the support of the community, council may decide to throw more resources at it. That's where we go from here," he said.

Other comments included the Otago Regional Council paying some of the cost, gravel extraction from the Kakanui and Waianakarua Rivers which has hastened coastal erosion because less was being washed out to sea, other funding sources including the Government and adding a cycle-walkway to the coastal road.

The coast road is popular with locals and tourists as a scenic route.

It is also used as a bypass to State Highway 1 when it is blocked by flooding or other emergencies.

Submissions close on May 28.

The council will hear submissions on June 9 before making a final decision on the strategy.